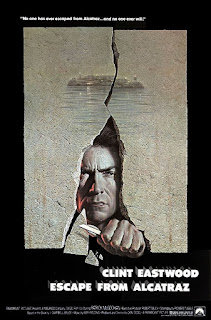 Steve Taylor-Bryant escapes from the stationery cupboard to remember Escape From Alcatraz...

The other day a news report caught my eye. For many of you this is not shocking as it happens to you on a regular basis, but I don’t read news, I haven’t touched a newspaper for over a decade, and I’m not the fan of the internet that many of you are. The world depresses me and I don’t need to be force fed more depression. However, a news report about Alcatraz is just too much intrigue for one man to bare, especially when it combines the real life men from an old favourite film of mine – Escape from Alcatraz. The news report (here for your own perusal, apologies that it is Murdoch Press)seems to point to my own long held belief that after escaping the inescapable prison the inmates, Frank Morris, Clarence Anglin, and John Anglin did actually survive and get out of the Bay and managed to drift into society, surviving for longer than the authorities thought they had. Whilst the conspiracy theory nut side of my brain was having a field day, the film loving side wanted to return to where my fascination began, 1979’s Don Siegel film Escape From Alcatraz, so I did. And now you can too!

Frank Morris (Clint Eastwood) has escaped prisons before and is no fan of the discipline system and so is sent to Alcatraz because, whilst many have tried, no one has ever escaped The Rock. What follows is an astonishing film made by Siegel and his Director of Photography, Bruce Surtees, in a very emotional way. There is very little dialogue throughout the film, and the feel of prison and its problems is brought to you by a superbly unnerving soundtrack from Jerry Fielding and camera positions that just heighten tension, flicking between close up character reactions to an event to wide and sweeping landscape shots that never let you settle completely. Whilst the escape is the point of the film and Jack Thibeau as Clarence Anglin and Fred Ward as John Anglin are very well cast, it is the title after all, it’s more about the story of all these men and how they come together, interact with each other and the guards, and how the Warden, portrayed brilliantly by Patrick McGoohan who chips away at the psyche of his inmates as quickly as Morris chips away at his wall. Doc (Roberts Blossom), Charley Butts* (Larry Hankin), English (Paul Benjamin), and Litmus (Frank Ronzio) add a real ensemble feel to the movie making it so much more than just a story of the Anglin brothers and Morris, or a vehicle for Clint Eastwood, there is a camaraderie and chemistry amongst them all that makes ever trial and tribulation they go through in prison all the more personal to the viewer.

Escape From Alcatraz is by far my favourite prison film, mainly because of the real life stories, and whilst there are great fictional prison related films in the world they all have an ending, people either escape to happiness or they die, with Escape From Alcatraz the ending is ambiguous, it leaves itself open for all the conspiracies that followed which in my eyes makes it more than just a film but an educational think piece as well.

* Butts is a fictional name for the film, in reality the prisoner that helped the brothers and Morris flee was Allen West who couldn’t remove his grille on the night of the escape and ended up helping the F.B.I. with their investigation into the escape. This isn’t the only fictionalisation in Richard Tuggle’s screenplay as from when Morris arrived in Alcatraz to the escape there had been a couple of wardens, but for cinematic consistency McGoohan plays a nameless warden that is there throughout the story, and English was in fact a native American named Clarence Carnes.