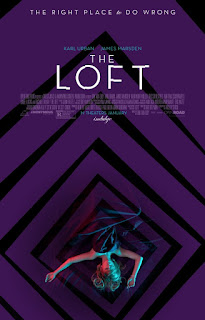 Steve Taylor-Bryant decided not to go Dutch and watched the English language remake of The Loft...

Nearly a decade ago a friend of mine gave me a Dutch film. I don’t mind foreign language films, I follow subtitles quite well without them taking me out of the story, but unfortunately this particular DVD, Loft written by Bart De Pauw, whilst it looked exciting and fresh, didn’t have the subtitles I was expecting and so I had to give up on it. I then heard that the film’s director, the Belgian filmmaker Erik Van Looy, was making an English version of the film and I was quite excited to see if this thriller was as good as it had looked in its European original. 2011 came and went and whilst I had heard that the film had been made it never materialised. Then real life happens and you move on and I missed the fact that in 2015 The Loft was finally released. Its debut seemed to pass me by, I never saw any press for it, none of my social circle mentioned the film, and so I never got the opportunity to see it. Fast forward to 2018 and I had set aside time recently for something that, in the end, wasn’t necessary so, finding myself at a loose end and not wanting to waste the writing time I had managed to schedule myself, I put on Netflix and scanned the new uploads list for that week. And there it was, The Loft in all its English language remake glory. So finally after nearly ten years I get to see if the film is worth all the waiting.

The architect Vincent Stevens (Karl Urban), the psychiatrist Chris Vanowen (James Marsden), the real estate agents Luke Seacord (Wentworth Miller) and Marty Landry (Eric Stonestreet) and Chris' half-brother Philip Trauner (Matthias Schoenaerts) are married and best friends. Vincent has designed a brand new building and proposes that he and his friends share one of the wonderful penthouse lofts. This would allow them to hook up with other women without worrying about hotel charges showing up on their credit cards. When they discover the body of a beautiful woman cuffed on the bed in the loft, they argue over whom is responsible and secrets are disclosed affecting their friendship.

Was The Loft worth the wait? Sort of. It’s certainly not without some flaws but there is something beautiful in the way it is shot, there is something mysterious in the twists that are appealing, and I can’t find a fault in the casting, I just think that there something in the dialogue has maybe not translated that well. Screenwriter Wesley Strick has done a great job producing a script that is taut and thrilling, the timeline jumps help to bring a tension to the narrative, and the cast play their roles really well allowing you to buy into the story. I just don’t always buy the dialogue, it on occasion seems stilted or lacking in some depth, but this gripe aside The Loft is definitely worth your time. Karl Urban as Vincent growls his way through his scenes in a way that only Karl Urban and perhaps Jack Nicholson could ever get away with, and James Marsden, Matthias Schoenaerts and, surprisingly because I only know him from comedy, Eric Stonestreet are all very good in their very different dynamics. It is Wentworth Miller though that steals the entire film, a performance from him that is so understated, almost weak and then so ingenious and evil was pulled off in a stunning way by an actor that always seems to impress me. Miller’s Luke is the pin that holds the whole plot together and an actor of lesser talent could have crumbled the entire film. Miller though pulls every string of intrigue, every emotional response, together so very well which builds the tension for that finale and without such a fantastic performance this film falls flat from the off.