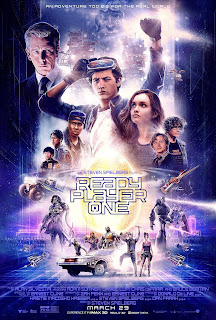 No prizes for guessing that a new teaser trailer for Ready Player One has been released...

It's almost, nearly, not quite (but who's counting? OK everybody's counting) about a month or so until the most anticipated film of the year (by some of our writers at any rate) hits the big screens on March 29th. So it's no wonder that the hype is really kicking up a notch.

This time the trailer uses Halliday's "original poem" clue for his Easter Egg Hunt as its text. Well, it nearly does, as the words have been changed from the one in the book. I know, right? How dare they?! What's a Gunter got to do to get a verbatim quote around here? It's not too drastic though, don't worry. To be honest, I'm not entirely sure why they had to change it at all, but anyway...

Here's the original original poem, as seen as part of Anorak's Invitation to the Easter Egg hunt

And here's the text from the trailer

Three hidden challenges test for worthy traits
Revealing three hidden keys to three magic gates
And those with the skill to survive these straits
Will reach The End where the prize Awaits.

Oh, also (sub-rant) why are the prizes on JoinTheLeaderBoard.com (a website mentioned at the end of the trailer) only available to the US? It looked like it would have been a fun thing to do. [cue Gunter-related grumblings]