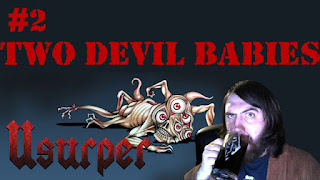 There's a lot of rolling about and rainbow babies in part Two of the Defective Inspector's Let's Play video of Usurper, currently on early release from Pugware...

This time on Usurper, the Defective Inspector learns about creepy bug women, gets a monster sword then doesn't know what to do with all his vitae.