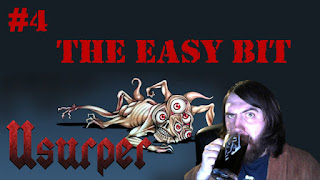 The Easy Bit might not be as easy as it sounds in Part 4 of the Defective Inspector's Let's Play of Usurper, currently on early release from Pugware...

This time on Usurper The Defective Inspector uses his old noodle, hits things with his mabob and discovers he has a very particular set of useless skills.