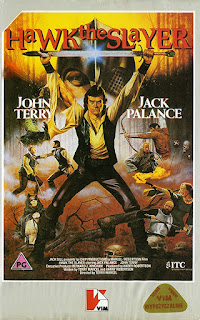 Our small band of Gunters here in The DreamCage universe are reviewing every film mentioned in Ernest Cline's Ready Player One. This week, Tony Cross tackles Hawk the Slayer...


I’m not sure where this film emerged from. It’s directed by Terry Marcel, who co-wrote it with the Producer, Harry Robertson. Robertson also, apparently, composed the music for the film. This implies a certain labour-of-love quality to its production. It’s a fantasy film, with the fingerprints of Dungeons and Dragons all over it.

Yet it seems to be set not in some mythical world but in a sort of Medieval England where magic rubs shoulders with the established Church, where the last Dwarf, Giant and Elf all hang about together to form an adventure party with a man called Hawk (John Terry*), who is the son of a King. This being one of those films, there must be a magic sword. There must also be a villain with a suitably villainous name.

So, ladies and gentlemen, may I introduce you to Jack Palance as Voltan.** Now, perhaps this is where Hawk the Slayer starts to go a little awry. Jack Palance, who I often think of as the bad guy version of Clint Eastwood, sticks out like a sore thumb in a film where almost everyone else – except for the titular Hawk – is a fine, upstanding British character actor. Now Palance is a good bad guy in many a film, but he isn’t the man to cast in a Dungeons and Dragons based fantasy film that’s going to take place mostly in what looks like Black Park in Buckinghamshire dressed up with the occasional skeleton and some fake spider’s web.

Palance might be perfect casting for a Western and director Marcel directs many the fight scenes as if he’s making a Spaghetti Western with lots of standing around staring as the camera closes in on the eyes of those doing the fighting. Not content with that Marcel gets Palance to bastardise his infamous ‘pick it up’ scene from Shane. It’s not Palance’s fault. He gives in 110% but he fits into this film in the same way that a square peg fits into a round hole.

But, what is the film about I hear you cry. Well, it is the tale of two brothers. One, Voltan, is a bad guy with a bad wound. The other, Hawk, is a good guy with a magic sword and a grudge against Voltan. O yes. Voltan isn’t just generally bad. He was specifically bad to Hawk after Hawk married Elaine (Catriona MacColl) who was supposed to be betrothed to Voltan. (I think that’s right. It got quite soap opera at on point.) Then Voltan kills their father and goes off on a Kingdom damaging rampage allied with a nameless dark wizard with a fine line in temporary pain relief.

There is also a man called Ranulf (W Morgan Sheppard) whose village was destroyed by Voltan and his men. He finds his way to a convent, where his wounded hand is chopped off. The Convent is run by The Abbess (Annette Crosbie). Voltan turns up and the Convent, kidnaps the Abbess and demands a huge ransom for her return. Ranulf sets of to find Hawk, who will help them. Hawk agrees and pulls together a gang to help made up of the Gort, the last giant (Bernard Bresslaw), Crow, the last Elf (Ray Charleson) and Baldin, the last Dwarf (Peter O’Farrell). It’s all a little Magnificent Seven with a dash of magic, which makes me think that they wrote a fantasy story that they wanted to direct like a western. It’s admirable in a way. Even though it doesn’t work.

Now, I’ve been resolutely taking the piss out of this film so far. There’s some odd performances, apart from Palance’s too. Shane Briant’s Drogo has all the subtlety of a brick and Ray Charleson plays Crow like he’s a robot rather than an Elf. He is supposed to be taciturn, but he comes across as mildly concussed. Then there’s John Terry as Hawk. He’s supposed to be charming and heroic but instead he’s out charismaed by Bernard Bresslaw. The problem is Terry is under-playing what Palance is over-playing and the two seem incapable of being in the same film. It’s like matter and anti-matter. Or, if you want an obscure Doctor Who reference, like Brian Blessed and Patrick Ryecart in the Sixth Doctor adventure, Mindwarp.

I suppose the question after all of this is, despite all I’ve written, is it entertaining. Well, I’d have to say yes with qualification. It is only just over an hour and a half in length but still feels a little draggy at points. I never felt that this was so awful I had to stop watching it. I’d file it under ‘bad/good’. Just watch it to wallow in Jack Palance and play Name That British Actor. Plus, Krull, which comes three years later, does the same thing better. And that’s also got Bernard Bresslaw in it.

So, its probably worth a watch.

Damned there. With faint praise.

**It helps if you say ‘Voltan’ in a suitable growly way.