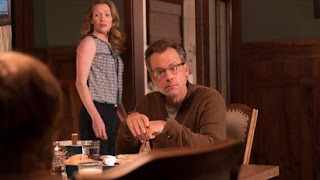 The world is under attack from aliens. Charlie must make difficult decisions to protect his mother and the human race, as he is among the first to realise that humans are being replaced by dangerous monsters.

Ahead of the new episodes, Channel 4 have released an interview with Greg Kinnear who discusses his teenage discovery of Philip K Dick and his relevance today

What was it about playing the Father and the Father Thing that got you excited about the role?

I was familiar with Philip K. Dick’s stories and I had read some of his stuff in high school-- as far back as high school. I thought he had a very strange writing vibe that I kinda liked and obviously it's certainly touched a chord with a lot of people. They've made a lot of translations of his writing into successful television and film. And, I think his view of the world and the stuff he was writing about is very relevant today, as somebody who wrote about big corporations taking over the world, and authoritarian governments, and strange reality questions of what's real and what's not real. And writing about kind of fake realities and stuff was something that I guess he was ahead of his time in terms of how computers would affect our world and obviously touched a real chord.

It's a typical American family, I guess - one-child American family. There's a boy and a mother and father, who are going through some unspecified marital issues and he's kind of caught in the middle of this. He's aware of it. The father and mother haven't told him what's happening, but it's something that they need to explain to him. Other than that, a very loving, family dynamic in a strange way between the three of them that is undermined in a way by this thing that enters their world.

The father and son have a definite bond over sports and trivia. What was that like to play and did that help you make a connection while filming?

Not really. I have three daughters. So I guess from that standpoint, I mean sports and your child is actually something that is a great connection and something you can engage with them on. It's different from school and it's something that a parent can have their own special piece of a relationship with a child through sports, so that plays a role in this.

How would you describe "the event" the changes the situation?

It is obviously a global event that's happening, that takes place, but rather than seeing it on the grand scale of the world, we're just following it in this small midwestern neighborhood and seeing the effects of it in a way, I think, that's appropriate. It makes the story more engaging and more interesting, but specifically what it is or how it's happened, we don't see any martians. There's no monsters really. It's a transformative experience that's happening to people after they're taken. It's sort of like after you see someone before they have an iPhone and after they have an iPhone. It's basically there. There's a change and once that change happens, there's no going back. They're pickled. 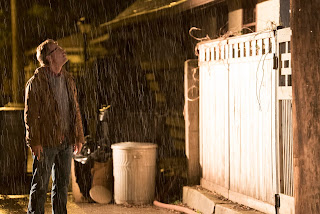 As an actor, what was the key difference between playing "The Father" and "The Father Thing" that you latched onto for the portrayal?

In the Father, he's troubled, he has family issues, but when the Father Thing comes in, he is happier. Or, he thinks everything should be good and perfect in the family, was that something that was easy to transition?

Yeah, for me. The arc of that is there's a time coming very quickly where this transformation will take place for everyone. Not just for him, but all of the people around him. That's the only obstacle keeping him strange and strained is that not everyone has flipped. The son, the little rascal that he is, isn't falling in line as easily as the rest around him. He's formidable, which I think the Father Thing kind of appreciates actually, but it's just a matter of time.

Do you think there's any humanity as we know it in the Father Thing?

Yeah, I do. Everyone has their own point of view. It's weird. It's not like an archvillain, which is really fun to play, where you're trying to blow up and destroy the world. It's not that, it's more nuanced, subtle form of evil. I'm not even sure it's evil. It's disruption. You know, we have a lot of disruptive technology in the world right now and there's something disruptive about this with these new beings. And there's something disruptive for these new beings in terms of trying to make their way here. It's an adjustment, which is kind of a scary way of dealing if something like this happening in the world right now and in so many parts of our lives.

What's the key takeaway or lesson from this episode?

I think Philip K. Dick had a very forward-thinking idea about a future society that in some ways we may be emulating. I don't think there's any huge message in this one. I think there's a hope in it and it's a very fun story. If any part of his own background is in there, it's just what's real and what's not.

Overall, how would you characterize this episode? Does it have more heart, more creepiness, more science fiction?

I liked the script because it has a little bit of everything. It's a very lovely family dynamic that we establish and then you start to realize there are hidden secrets - as there always are in a family - and then it takes a huge left turn when the events transpire that kind of set the story into motion. It's kind of painfully creepy and very funny as well. It's very subversive in scenes in how it's played. Jack's [Gore, who plays Charlie] does a great job with the boy finding all the real colours in it.