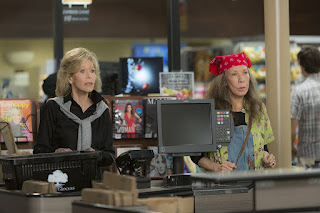 Steve Taylor-Bryant turns up another gem on Netflix thanks to a bit of a tantrum, as he binge watches Grace and Frankie...

You know when you’re really tired and you’re desperate for an early night but your youngest child still isn’t quite settled so you try and find something on television to watch that is only about half an hour long? Then your youngest child finishes throwing Lego around his room and telling you he doesn’t need to go to school any more because he’s nearly six and all grown up so you can switch off the nothingness you're watching downstairs and go to bed, right? Wrong. You can’t go to bed. Yes, you found something that isn’t very long that you could have on in the background whilst the upstairs tantrums die off but you made the mistake of finding said programme on Netflix and now you’ll never sleep again. This time is was a show I never expected to like, one I knew nothing about, and another one like The Good Place that nobody recommended. Yes I need new friends, but I’m also now addicted to Grace and Frankie.

The series follows Grace, a retired cosmetics mogul, and Frankie, a hippie art teacher, whose husbands, Robert and Sol, are successful divorce lawyers in San Diego. Grace and Frankie's lives are turned upside down when Robert and Sol announce that they are in love with each other and are leaving their wives. Now, the women, who have never particularly liked each other, are forced to live together and learn to unite and cope with difficulties.

Because of my unconditional love of Aaron Sorkin there is a group of actors I’ll watch in anything, always excited to see how they will perform with 85% less rapid fire dialogue. I’ll watch Bradley Whitford open a Coke can, Richard Schiff and Alison Janney could kidnap my mother and I’d still forgive them, there’s also Joshua Malina. In Grace and Frankie it’s the West Wing meets The Newsroom as the four main protagonists are Martin ‘that’s President Bartlet’ Sheen from West Wing, Jane ‘disabuse yourself of the thought that this is a conversation amongst equals’ Fonda of The Newsroom, Sam ‘the newsroom became a courtroom because I felt the American public needed a fucking lawyer’ Waterston of The Newsroom, and Lily ‘if you want to talk about getting screwed with your pants on’ Tomlin also from the West Wing. But this isn’t Sorkin. This is something new, this is also hilarious. I can’t relate to being as old as the characters, I can’t relate to their unique situation in the slightest, and compared to their grown children in this show I’ve been raised okay by my folks, but I get every joke, every emotional trigger hits me where it should, I care what happens to all of them, I take sides and then change my mind when I see the other side, and somehow my own life struggles seem to pale into insignificance as I want to save Grace, Frankie, Sol and Robert from any more heartache.

Rarely does such a group of characters, especially from something that is basically one rung above a sitcom, have such an effect on me and, whilst the writing is great, it’s down to the performance of four of the most superior actors of their generation. If you have half an hour free, who am I kidding, if you fancy losing two days to a television show, I urge you to get on board the great train Netflix and check out Grace and Frankie.