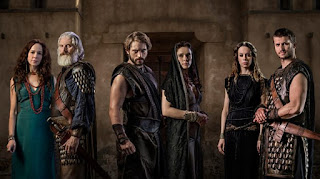 Written by David Farr, who adapted The Night Manager for TV, a new drama series Troy: Fall Of A City starts on BBC One tomorrow evening...

Told from the perspective of the Trojan family at the heart of the siege, Troy: Fall Of A City is an epic story of love, intrigue, betrayal and belonging, told over eight episodes. Combining thrilling adventure with heart-breaking intimacy, it explores primal emotions, the psychological repercussions of human actions and life-changing decisions amid the devastation and destruction of war.

Following a fateful encounter with the gods, the life of young herdsman Paris (Louis Hunter) changes forever. At the Troy city games he discovers something extraordinary about himself. Then, on a trip to Sparta as a guest of Menelaus (Jonas Armstrong) and Helen (Bella Dayne), he falls in love, with unpredictable and far-reaching consequences - provoking a conflict that threatens to bring an empire to its knees.


Ahead of the series opener, the BBC have also released this interview with writer David Farr and Executive Producer Derek Wax:

How did the series first come about for you?

Derek: It was around 2010. I’d just finished making the mini-series Occupation for BBC One, which dealt with the Iraq war and its complex, messy aftermath. I found myself in Kefalonia and Ithaca, re-reading the Greek myths which I’d loved as a boy, and thinking that, though at one level they are so distant from us - 3,000 years old - how raw, immediate, primal and elementally rich they are.

And with The Trojan War, how extraordinarily vivid and powerful: characters faced with heartbreaking, life-changing dilemmas; the morality of war, the huge questions - do you carry on fighting where you’ve lost faith in the cause? All these massive questions facing humans at moments of emotional crisis in their lives. I thought perhaps there is a way of doing justice to this great epic story, combining the intimate and epic, the human and the ambitious scale, in one narrative.

I started looking for a writer who might share this passion, and thought of David, aware he’d written an adaptation of the Odyssey for the RSC and having watched his episodes of Spooks. We met and hit it off, he engaged with the idea and the source material so dynamically, Homer and all the myths that have come down to us... He also wanted to give it a psychologically more authentic approach, and then had this very clear, original take, telling the drama mostly from the Trojan viewpoint and starting with the birth of Paris. So we started on this big adventure together...

David: Telling the story from the Trojan point of view was my way in. I'd done the same with a theatre adaptation of The Odyssey. Perhaps I'm temperamentally driven to see things from the point of view of the attacked rather than the attacker. And I wanted to explore what was happening within those walls. How would Helen and Paris survive this war they've caused? They've always been seen as the foolish lovers whose caprice causes chaos, but I found in them desperate outsiders who find in each other what they fail to find in their individual lives. But it only brings disaster.

How did you research the series?

Derek: It's such rich and fascinating territory. Michael Wood’s 30 year-old BBC documentary series, In Search Of The Trojan War, is still essential viewing. And we had two wonderful historical advisors, Bettany Hughes and Nigel Tallis, to help us understand the culture of the Bronze Age. It's intriguing to reflect on that grey area between history and myth. What may have happened, and what was invented by Homer in his great poems, which are the oldest works of European literature.

A couple of years ago David and I went to the ancient site of Troy in Hisarlik, western Turkey and spent a few days there. Troy has 5,000 years of history - nine cities layered layered on top of each other - and it's right by the first world war battlefields of Gallipoli too. The ancient and the modern side by side. It galvanised us even more. I kept coming back to Greece over the following years, saw ancient Mycaene, home of Agamemnon, saw Nestor’s palace at Pylos, and my obsession with this story kept growing.

David: I read pretty much everything. It made me realise that to some extent Troy is made less of stone than of words. Is Hisarlik really the site of Troy? Maybe. Maybe something similar. What we do know is what Homer and Euripides and Virgil handed down to us. It's all layers of myth and story. It liberated me a little. They invented. They completely re-imagined. It allowed me to do a little bit of the same. 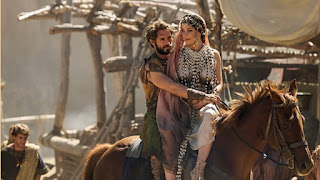 What was it you set out to achieve with the series?

Derek: It all starts with character and story. These are stories of love and war, intrigue and betrayal, pain and loss, and I wanted us to embrace all of that... I wanted us to really explore the complex family and political dynamics while keeping it grounded and authentic. I wanted to wipe away the dust that may have accrued on it for some people, and mine the urgent, raw reality...

But at the same time, I wanted us to try to visualise the beauty and prosperity of this city, which doesn't have the might and power of the invading force, but is somehow precious: we should care about it, feel invested in it emotionally. We also had the gods and we wanted them to be in it, and David made a very strong case for retaining them, as a sort of disconcerting parallel reality to our human world.

David: I love telling stories, I don't really think in terms of clear 'aims'. I have an instinct. In this case I wanted to tell the story of a peasant who finds out he's a prince, and a queen who is utterly unhappy in her marriage. They fall into a passionate affair and unleash demons. That seemed interesting to me. And I knew that long-form television would allow me to explore longer and more complex psychological narratives, bring in new characters, and hopefully move the story away from the more comic-strip elements to something that delivers on an emotional level. As for the gods, I never saw them as anything that different to humans. They're equally capricious, passionate and volatile. They're just part of the brew.

How did the creative contribution of the director and designer help to set up the vision of the show?

Derek: Three of the most important people who came onto the team were Barney Reisz (producer), Owen Harris (director) and Rob Harris (production designer). We recced Croatia, Malta and Spain before we decided on Cape Town for the shoot. As a team, Owen and Rob were responsible for creating this beautiful, dark, evocative world, building these cities and bringing them to imaginative vivid life.

David: Owen and I talked a lot about the battles, about them not just being action, but somehow poetically integrated into the inevitability of what must happen. Battles are actions of fate in this story. They are the unleashing of greater powers than we can understand. I think he and the other directors Mark Brozell and John Strickland have done something very special with those sequences. 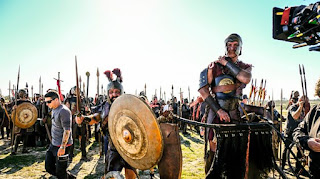 You must be thrilled with the cast you assembled. Can you talk us through the casting process?

Derek: It was a great pleasure to be working again with Victor Jenkins, who had cast Humans for me. He loved this world and had studied and knew these characters. We knew from the outset that this was an ensemble piece and there were around 14 equally strong and castable roles, Trojans and Greeks.

We liked the idea of casting relatively unknown actors for the parts of Paris and Helen. Paris is only 20 when the story begins and has a reckless, impulsive, rough quality because of his upbringing; he is immature, but he is fundamentally a good person. Louis Hunter brought a warmth and charm to the role, really captured Paris. As did Bella, with whom I had worked on Humans, and was aware of her range and intelligence as an actor.

In all the other roles we were very blessed to attract actors of extraordinary ability and truth who inhabited their roles so completely. It's hard to single anyone out - they were all so good, and embraced the emotional intensity of these stories, the anger, grief, jealousy, passion etc. All the roles required actors of depth and complexity and we were lucky to have them.

David: I was very pleased to nab David Threlfall for Priam. He's been a hero of mine for a good few years. I met him in Waterloo and told him I wanted Priam to be the heart of the thing. Priam is a deeply rooted warrior-king. He loves his city in a way that isn't 'trained' but deeply instinctive. David's just got a gift of being truthful in every moment. But that's true of so many of our actors. It's a genuine ensemble. Joseph Mawle's Odysseus, David Gyasi's Achilles, Johnny Harris' Agamemnon, Chloe Pirrie's Andromache and so on. They've each made the roles their own which is all you can ask.

What can audiences look forward to with Troy: Fall Of A City?

Derek: Hopefully a big epic that is grounded in passionate, heartbreaking emotional and psychological truth… a big story and a real emotional rollercoaster which takes us into a world that is thousands of years old but feels fresh, raw and vivid.

David: I think it's a story that builds and builds, and becomes more emotionally engaging as it develops. There are a lot of characters, lots to get to know, but I think it rewards that investment. It's got a heart to it. I think that's a good thing at the moment.

Finally, what was it like filming in South Africa? What makes it the right location for the series?

Derek: The incredible talent base there really delivered. They are so professional and so experienced, from costume and make-up through to stunts, horse wranglers, everyone. We needed to achieve huge stunts, battle scenes on not enormous budgets, and they helped us to do that. Working there is a joy because they are welcoming and friendly and know what they are doing. Also the landscapes gave us everything we needed, beaches, forests, mountains, battle plains... it looked like Turkey, not Africa.

David: Great people, great energy, I really loved the place. I'd never been before but the energy of the people was very exciting.

Troy: Fall Of A City starts on Saturday 17th February on BBC One at 9:10 pm