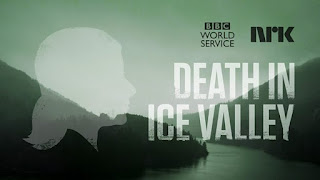 The BBC World Service and Norway’s NRK are joining forces on a major new podcast-first production, Death in Ice Valley, which will investigate the mysterious death of a woman in Norway in the 1970s...

Death in Ice Valley has been commissioned specifically as a podcast and combines innovative production with first-class journalism and storytelling. Listeners will join investigative reporter Marit Higraff and documentary maker Neil McCarthy, on a journey in which they will attempt to piece together the woman’s life. Who was she? Why hasn't she been missed? Was her death the result of murder or did she take her own life?

Episodes will be released weekly and Marit and Neil are poised to react to any significant leads that come into them from podcast listeners. The series preview will be made available on March 26th, with the first episode launching on April 16th. Listeners will also be invited to join and contribute to a Death in Ice Valley Facebook group.

The World Service English Podcast Editor Jon Manel, who commissioned the series, says: "We are in the process of transforming our podcast collection. Death in Ice Valley is an immersive, episodic listening experience, designed specifically with podcasting in mind. Investigating a true, very sad and perplexing story, it seeks to use both science and the power of podcasts. Can podcast listeners help to provide answers?"

Often referred to as the ‘Isdal Woman’, the body was discovered in November 1970. No one knew who she was and almost half a century on, her identity remains a mystery. Her badly burnt body was found in the remote Isdalen (Ice Valley) under unusual circumstances. Police investigating at the time found her suitcases at the nearby Bergen railway station, with disguises inside. The woman had stayed in numerous hotels using different names. Labels had been removed from her clothing. It is a case which has perplexed Norway.

All that is known is she almost certainly wasn’t Norwegian. This is an international investigation.

NRK’s Marit Higraff has been investigating the case for two years. She and Neil McCarthy will be travelling across Norway and beyond to find out what they can about the woman at the centre of this enduring mystery.

Frank Gander, chief editor for documentaries at NRK, said “This collaboration with the BBC World Service opens up new possibilities in the case of the Ice Valley woman for NRK. Although we reach 4 of 5 Norwegians daily through radio, TV and online, the BBC has a far wider wider reach. And one of the main theories in this mystery is that the answers lie somewhere in Europe. It has been exciting and rewarding to work with BBC on this project, and my team and I are anxious to see what kind of feedback we will get when this podcast series starts in April”.

Mary Hockaday, Controller, BBC World Service English agreed, adding “We’re thrilled to be collaborating with NRK, combining the shared expertise of our journalists and documentary makers as they delve into this riveting and perplexing story. The growing popularity of podcasts is phenomenal, and Death in Ice Valley is just one example of how we’re exploring the power of podcasts to offer our World Service audiences new stories and new ways of listening.”