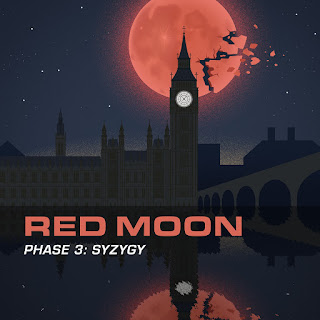 The planets start to align as Susan Omand heads back into alt-London for Phase 3 of Wireless Theatre’s audio drama, Red Moon – Syzygy…

“sometimes all you need in Intelligence work, counter or otherwise, are a few transferable skills… and a lot of patience”

From an introduction of a news report at the protests against Space Command at the Women’s Peace Camp in Cumbria, so reminiscent of the anti-nuclear protests of the time (remember this is set in the late 70s and Greenham Common was just around the corner in the real world) we are immediately transported back into the middle of London as our main protagonist, Eddie Sloper, takes the train out to Hammersmith, or rather, what’s left of Hammersmith as it is mostly a “grey on brown building site” now. He is heading for a rendezvous with person, or persons, unknown at the Polish Social and Cultural Association, thanks to a very mysterious tip off at the end of episode two. Once there, he discovers a trade conference in full flow and he spots a familiar face in the crowd… a familiar Russian face. However, that’s not the only recognisable face in the crowd as he also bumps into his frenemy Quirke from MI5. Quirke escorts him off the premises and into a car, taking him back into the city centre with a warning to back off the case… “Get it?” “Got it.” “Good!” During their conversation though, Quirke lets slip where their mutual Russian friend has been staying and Sloper gets out of the MI5 car and straight into a taxi. Wonder where he’s going…

Meanwhile, the pieces elsewhere are slowly falling into place: Doctor Susan Madison is still waiting for her meeting with “someone from Space Com”, Lt Gen Atherton lands at Space Command UK HQ after flying over the protests and a would-be assassin attempts to do a bit of tidying up in St James’ Park.

Having listened to the first two episodes one after the other (read my reviews here and here), I was keen to get back into the mind and monologue of ex-MI5 man Eddie Sloper, to see how the story and the conspiracy progresses, and I was not disappointed as we drop straight back into the plot. It might have been useful, given that it’s been a couple of weeks since the last episode, to have had a “previously” catch up but I soon remembered where we had got to. Again, the writing and sound design meant I was quickly absorbed in both the realism of the alt-universe and the suspense and tension of the story itself. And I must highly commend Rob Valentine for the very neat Easter Egg in the coded transmission (yes, I’m one of those people that has to work out ciphers if they’re there and this one is worthy of applause). The characters of Sloper and Quirke are also rounding out very nicely, with some marvellously barbed dialogue, but the absolute star of this episode for me is again Steven Critchlow, this time voicing Sloper’s rambunctious Russian friend Luchnik. I am a huge fan of NCIS Los Angeles and Critchlow’s Russian agent voice was a ringer for their friendly Russian mobster Arkady Kolcheck. It really added to the story for me to have a mental visual of that character (Sloper looks like Cormoran Strike in my head in case you’re wondering).

Again, we’re left with the wonderful frisson from the cliff-hanger ending. What will become of Doctor Madison now that she’s met the menacing Mrs Jones?

You can stream Phase I of Red Moon FREE on the Wireless Theatre Company website where you can also buy Episode Three for only £1.49 and find the rest of the series as the episodes are released.