Book - A Breath After Drowning 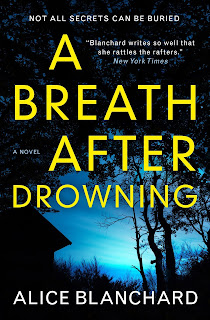 Titan Books announce the publication next month of the new psychological thriller from the award-winning author of Darkness Peering and The Breathtaker, A Breath After Drowning by Alice Blanchard...

Sixteen years ago, Kate Wolfe’s young sister Savannah was brutally murdered. Forced to live with the guilt of how her own selfishness put Savannah in harm’s way, Kate was at least comforted by the knowledge that the man responsible was behind bars. But when she meets a retired detective who is certain that Kate’s sister was only one of many victims of a serial killer, Kate must decide whether she can face the possibility that Savannah’s murderer walks free.

As she unearths disturbing family secrets in her search for the truth, she becomes sure that she has uncovered the depraved mind responsible for so much death. But as she hunts for a killer, a killer is hunting her…

A Breath After Drowning is a brand new psychological thriller and marks the highly anticipated return of award-winning author Alice Blanchard. Tackling themes of mental health, trauma and abuse, this engrossing thriller is a page-turning read that will captivate crime fans around the world.

ALICE BLANCHARD won the Katherine Anne Porter Prize for Fiction for her book of stories, The Stuntman’s Daughter. Her first novel, Darkness Peering was named one of the New York Times Book Review’s Notable Books. Her second novel, The Breathtaker was an official selection of the NBC Today Book Club. Alice has received a PEN Syndicated Fiction Award, a New Letters Literary Award and a Centrum Artists in Residence Fellowship.

A Breath After Drowning is Published on 10th April