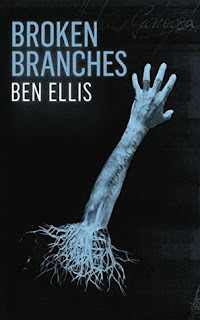 Steve Taylor-Bryant takes on a near future dystopia as he reads Broken Branches from Ben Ellis...

All men are sterile. Fertility drugs are given only to couples whose genetic matches are approved. Those without a family history to prove their genetic heritage are outcast from society.

Grace is a broken branch. As an orphan, she has no link to The National Family Tree, so she and her husband, Tom, are ecstatic when they’re approved to have a baby. But that was the easy part. Grace’s twin brother inadvertently gets a girl pregnant after a one-night stand, and his girlfriend isn’t happy because it should’ve been her. Both sets of parents soon become the target of a violent terrorist group that advocates genetic purity. To make matters worse, there’s something strange about the unborn children that’s attracting government attention …

I used to review a lot of self-published books by authors but, as my life became more hectic, I found myself in the unfortunate situation where I no longer had the time to seek out new materials. On occasion though authors seek me out to see if I’d look at their novel and I received a free copy of Broken Branches directly from its author Ben Ellis. I’m glad he contacted me as the synopsis piqued my curiosity and the book lived up to it, holding my attention right to the end.

There is a main narrative that runs throughout, containing interesting characters, and the reader's ability to second guess what is going to happen from chapter to chapter is diminished by a taut thriller playing out as dystopian science fiction. If, on the off chance, you think you’ve guessed what is happening in a chapter, well, then you get the almost alternative chapter at the end that throws you a curve ball. The main, ‘p’, chapters read like a conventional novel and tell the story you think you signed up for, and then you get the much stranger, ‘q’, chapter where someone else within the story is using the author as a vessel to spread information. This sounds weird and I guess it is, but I can't tell you how pleased I am that there is an author out there trying something different. It might not please everyone who reads the book, but it certainly pleased me*.

The main characters, a mixture of thoroughbreds and broken branches, are interesting and flawed like you know humanity is, the politicians as corrupt and as power hungry as you’d expect, and the inclusion of The Gardeners, a renegade terrorist organisation with warped beliefs, plays right into the reality we all face with splinter groups at the very extremes of our own world's politics. The story moves swiftly and grips, the action written with great style and the softer more emotional moments believable and moving. There are a couple of instances where I wish that Ellis had gone a bit deeper with his explanations of things, mainly more detail as to how an entire population of men were talked into taking medication that left them sterile; believe it or not, in a book full of quite strange concepts about DNA collection, foetus enhancements and genetic experimentation, it was that manly men willingly took a pill that left them sterile that I found most way out there. And I’d have appreciated a bit more depth and background into the government's actions and trials that led to some women becoming permanently sterile, the past devious actions by a government on the brink and trying to control population growth is a fascinating one and maybe Ellis has missed a trick by not exploring this angle further.

All in all, though, the book is a great read full of rich scenarios and characters that that you can root for and hate, hope for and abandon. It is a well-executed attempt at near future dystopia that reads quite cinematically and would lend itself well to a visual medium. A fantastic book that was possibly a few pages of deeper detail away from being perfect.

*Find out about the inspiration behind the choice of p and q for the chapter headings, along with a lot of other fascinating information in the "DVD Extras" section at the end of the novel - Ed