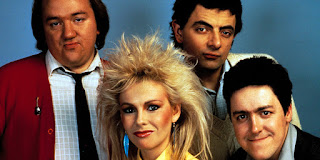 When I was a teenager I loved comedy.

I bought comedy albums, because that was the format by which comedy was delivered to the home back in the nineteen-eighties and nineties, by a disparate collection of comedians: Jasper Carrot, Not the Nine O’clock News, Ben Elton, Monty Python and others. I listened to them repeatedly. I knew some of the routines off by heart.

I never really watched sit-coms. I still have a bit of a blind spot about sit-coms, which I almost never watch. I wish I could tell you why, but I can’t. It seems to be the only bit of comedy that I’ve never built up a huge amount of enthusiasm for. It was all sketch shows and stand-up comedy and not just the new ‘alternative’ stuff. I loved ‘The Two Ronnies’ and ‘Morecambe & Wise’.

I read about the history of comedy, about Footlights and ENSA. I got fascinated by those comedians who began their careers in the 30s, 40s and 50s who were aging and dying by the time we reached the 1990s, although Ken Dodd made it to this year. I discovered The Goon Show and Spike Milligan, Frankie Howard, Billy Connelly, Peter Cook and Dudley Moore, Eric Sykes and Tommy Cooper. I learned about the links between them.

You’ll notice, at this point, that there weren’t many women on these lists. Yes, Friday Night Live gave a stage – occasionally – to women comedians but not many and not often. There was the genius of Victoria Wood, of course and French and Saunders but the Oxbridge branch didn’t seem to have produced many female comedians, although I was one of the handful of people that enjoyed and watched, Emma Thompson’s eponymous sketch show. It seems to me comedy now seems much healthier in this regard, even if the struggle for proper representation goes on and idiots can still say, ‘Women aren’t funny’. And yes, you’re idiots. Deal with it.

As we roll on through the I discovered Bill Hicks, Fry & Laurie, The Mary Whitehouse Experience – which led to Baddiel and Skinner which led to Frank Skinner’s own stand-up, Armstrong & Miller, Mitchell & Webb, Richard Herring and Stewart Lee, Eddie Izzard and others. The panel show allowed me to see snippets of comedians and decide whether I’d take a chance on finding out a little bit more about them.

The internet has made this a much easier exercise. YouTube is packed with clips of comedians. Sometimes – to the chagrin of their bank managers – whole shows. There’s also podcasts where comedians can talk to other comedians, of which Richard Herring’s Leicester Square Theatre Podcast – RHLSTP to the cool kids – is probably my favourite. As I result I discovered – late – the magnificent George Carlin, Lewis Black, Paul F. Tompkins, Alice Fraser, Nish Kumar, Romesh Ranganathan, Sarah Silverman, Andy Zaltzman, Tiff Stevenson and on. And always you can trace connections and lines between them and those that came before, which is part of the appeal to me. Listening to comedians talk about comedy and what influenced them.

And don’t under-estimate the role BBC Radio has to play. A lot of comedians who had successful television careers started off on the radio. I first came across Milton Jones and Mark Steele to name but two via Radio 4.

The funny thing is when I started writing this it was going to be about how I’d fallen out of love with comedy since I was a teenager, but I realised writing this that I haven’t. I spend a lot of my time listening to comedy and comedians.

It’s stand-up and sketch shows that I like. And yet I almost never go and watch stand-up live. I know why this is: hecklers and the mere theoretical prospect of hecklers. I have a low embarrassment threshold. Not just my own embarrassment but other people’s so I find the idea of hecklers makes my skin crawl. If I go out to watch a comedian I want to watch them, not listen to someone’s drunken banter. Even if the comedian deals with them with wit and skill – like Frank Skinner did when I saw him live at the Soho Theatre - it just makes me cringe. I should force myself out to comedy clubs to shake this off.

So, in some ways I’m still as in love with comedy as I was when I was a teenager just in a different way. Perhaps, back then, I saw myself as finding a career in comedy. Not as a stand-up. I’m to cowardly for that kind of thing. But as a writer. Now, I’m content with comedy as a way of shaking up how one sees the world, whether that’s through satire or surrealism or as a way of lifting the shadows at a time when the shadows seem to be lengthening and the light is going out.

Comedy, the saying goes, is hard but it has been – with Doctor Who – the background noise of my life. So let this stand as a small thank you to the comedians past and present who have done a sterling job of keeping me on the bright side of life.