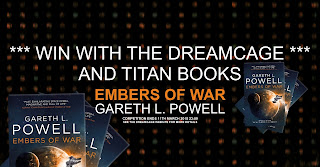 We're pleased to be part of the blog tour for Gareth L Powell's new novel Embers of War and, thanks to Titan Books, we have FIVE COPIES to give away...

The warship Trouble Dog was built and bred for violence, yet following a brutal war, she finds herself disgusted by conflict and her role in a possible war crime. Seeking to atone, she joins the House of Reclamation, an organisation dedicated to rescuing ships in distress. But stripped of her weaponry and emptied of her officers, she struggles in the new role she’s chosen for herself. When a ship goes missing in a disputed system, Trouble Dog and her new crew of misfits and loners, captained by Sal Konstanz, an ex-captain of a medical frigate who once fought against Trouble Dog, are assigned to investigate and save whoever they can.

Meanwhile, light years away, intelligence officer Ashton Childe is tasked with locating and saving the poet, Ona Sudak, who was aboard the missing ship, whatever the cost. In order to do this, he must reach out to the only person he considers a friend, even if he’s not sure she can be trusted. What Childe doesn’t know is that Sudak is not the person she appears to be.

What appears to be a straightforward rescue mission turns into something far more dangerous, as Trouble Dog, Konstanz, and Childe find themselves at the centre of a potential new conflict that could engulf not just mankind but the entire galaxy.

If she is to survive and save her crew, Trouble Dog is going to have to remember how to fight. 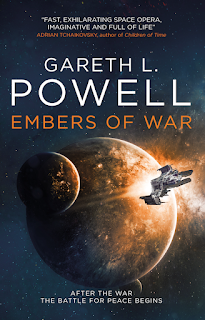 COMPETITION - HOW to ENTER

Our competition will be running on both our Facebook and Twitter pages - and you can enter on both. The competition closes on 11th March 2018 at 23:59 GMT.

ENTER ON TWITTER - Find one of our Competition Tweets like the one below and simply retweet it. Only retweets of posts from @TheDreamCage will count. 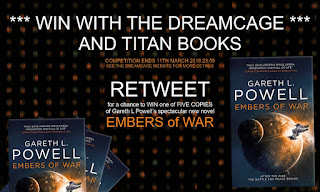 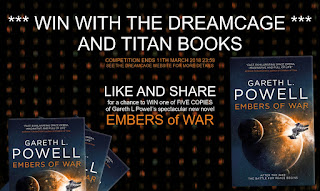 
The prize is as stated and no alternative is available.
The competition is open to UK, Ireland, Canada and US residents only.
Five winners will be chosen at random from all the RT's/shares of competition posts from The DreamCage Twitter and Facebook pages after the closing date and contacted via social media by The DreamCage when they will be asked to provide a postal address which will be passed on to Titan Books for the prize to be sent out.
The Winners' names only will be announced on The DreamCage website and social media.
The DreamCage and DreamCage Media Group accept no responsibility for the provision of the prize which will be supplied direct by Titan Books.
Please read our information privacy policy to see how your information will be used by The DreamCage. We are not responsible for how your information is stored and used by Titan Books.

Embers of War was released on 20th February 2018