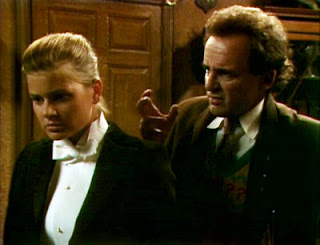 Our Doctor Who expert, Tony Cross, is journeying through all of time and space to bring us his thoughts on every available Doctor story. Today is the Seventh Doctor adventure Ghost Light...

﻿﻿ In this series of articles I have frequently complained about Doctor Who stories being padded out. However 'Ghost Light' is a rare case of a story that could have benefitted from an additional episode. With room to breathe an already excellent story could have ended up an absolutely classic.

From the moment Ace and The Doctor arrive at Gabriel Chase this story rolls beautifully along, even if sometimes you find yourself asking questions. This is Moffat-esque Doctor Who. You can imagine this story, with Amy, Rory and the Doctor with little alteration.

It has much going for it, particularly the exceptional cast who - without exception - do fine work: Ian Hogg oozes a seedy menace as villain du jour Josiah Samuel Smith whose appearance turns out to be very deceptive; Michael Cochrane as Redvers Fenn-Cooper, the Victorian explorer driven insane and then sane again by his experiences; Carl Forgione as Nimrod, 'a mighty hunter before the Lord'. The last surviving Neanderthal collected and now working as Josiah Smith's butler; Sharon Duce as Control who goes from creature, to ladylike to leader as the story progresses evolving up the social ladder as Josiah Smith devolves; John Nettleton as Rev Ernest Matthews come to tackle Smith for his Darwinian views. Nettleton not only plays Matthews with style but with impressive mutton chop whiskers looks exactly like the imaginations picture of a meddlesome Victorian clergymen. Rev Matthews ironic fate is both clever and unpleasant; Katherine Schlesinger as Gwendolin, Josiah's 'ward' who is both the nastiest and saddest character in the story alongside her mother, Mrs Pritchard. Sylvia Syms does a fantastic job of Mrs Pritchard. The scene between Schlesinger and Syms when they have broken their conditioning and talk about what they have done is a strong one; Frank Windsor as Inspector Mackenzie, whose job is simply to provide a bit of comic relief and - in his (almost) absence the punchline to a rather tasteless joke and finally there's John Hallam as Light whose performance is a little on the arch side but works for me. After all it isn't a part that calls for naturalism.

What a cast! But with all those characters squeezed into three episodes it can seem pretty crowded. It does need more time and space.

Then there's the atmosphere, which is odd and dark. There's a lot of nasty things going on, not least of which are the mysterious trips to Java that the Gwendoline's father and Rev Matthews have taken, which is an interesting euphemism for murder. A more domestic version of that ominous phrase 'resettled in the East'. It is Gwendoline's joyful attempts to send Ace to Java that open an insight into her character, which the Doctor nails shut by pointing out that - although hypnotised - she had enjoyed organising those trips to Java a little too much for him to forgive her.

The Doctor feels genuinely alien in this story too, which suits McCoy. Gabriel Chase it turns out is the haunted house that Ace was telling the Doctor about. So the Doctor takes her there. Back to Victorian England. It’s manipulative and when Ace realises it borders on bullying. He's bought her here to face her terrors but as Ace points out after the Doctor's rather wonderful - and applause for McCoy's performance here - 'Burnt Toast' speech, she wants to face her terrors on her terms. Not his. This 'testing' of Ace was all part of script Editor Andrew Cartmel's 'masterplan' for the character.

It was a parallel thread to the changes in the Doctor who has become more proactive, more manipulative and more powerful. In 'Battlefield' he went all Obi Wan Kenobi to persuade Peter and Pat to leave the Gore Crow. He also seems to have gained a Vulcan 'death' grip of his own. He's also got a new darker jacket.

He's still got the stupid question mark jumper though, which I have not mentioned at any point so far during the McCoy era because it makes me angry. Still. I thought I'd let all the rage out after I'd left college but the title sequence wink and the question mark jumper remind me of many a late-80s argument about how good Doctor Who was. And the bloody jumper is the costume equivalent of putting LOLZ after a comment just to make sure everyone knows it was meant to be funny.

Back to positives. Sophie Aldred is fantastic in this. This is Ace's story. In fact Season 26 sees a Doctor and Companion relationship that is much more balanced than previously. It feels like a New Who relationship, although devoid of any 'love' angle. The combination of the Aldred and McCoy is wonderful. They work well together. Their arguments seem to be less about bickering a la Peri and the Sixth Doctor and more about proper stuff.

It makes for a powerful combination and an excellent story. Yes, it is complicated and not everything is explained but it works and it works pretty well.