Documentary – Profilers - Gaze Into The Abyss 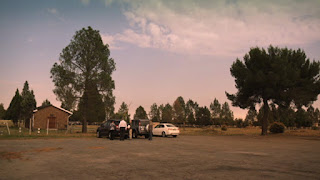 Steve Taylor-Bryant advises a strong stomach is needed as he watched the documentary Profilers - Gaze Into The Abyss, now available on Digital platforms...

As part of the Walk This Way series of documentaries from around the world I was lucky enough to be given a copy of Barbara Eder’s film, originally titled Blick in den Abgrund, which follows some of the world's top profilers, the psychiatrists and law enforcement officers that study murder and rape and try to give insights to help capture a perpetrator or perhaps help understand the whys and wherefores of a particular series of crimes. You’ve all seen Silence of the Lambs by now I’m sure, so picture Jack Crawford, the head of the FBI’s Behavioural Sciences Unit, and Jodie Foster as Clarice Starling and that gives you some idea of what the world believes these profilers to be like. In fact the team that Thomas Harris interviewed for the book are seen in the documentary, sitting on a couch, watching the movie and commenting on their roles with the research and how close the filmmakers got to real life. Then forget everything you know from your pop culture experiences of profilers and make sure your stomach is empty, because the documentary is horrific in its detail of the crimes involved and the way they are investigated, and the personal effect it has on the chosen profilers makes parts of the film very hard to watch. But watch it you must if you want a better understanding of the dark places these ladies and gentlemen must go to on a daily basis.

Some of the crimes are just so barbaric and described in more detail than you would ever deem necessary, so your sense of what’s normal and what’s horrible get pushed to their limits throughout your viewing. Whilst I won't describe every detail here, there were two moments of the film that stayed with me long after the closing credits had rolled. The South African crime involving rape and mutilation of elderly women being investigated by Gerard Labuschange, which just made me sick to my stomach because of the gruesome acts being described but, moreso, because of the calm and usual conversational style that Gerard and his colleague describe the acts in. This is a normal everyday occurrence for them and I’m not sure how, after 80 murders and 200 rapes, the gentlemen on the Intensive Psychology Unit aren’t basket cases, they seem so normal and to not have any adverse effect from the horror that surrounds their daily lives. The second moment wasn’t one of horrific tales or stomach churning sick description, but it was of U.S Psychologist Helen Morrison, a doctor that wants to do brain experiments on serial killers to see what makes them tick, sitting calmly at the dinner table with her husband regaling their two grown up sons about the time pre-internet that John Wayne Gacy, the serial killer and rapist who is thought to have killed in excess of 34 teenage boys and young men, had managed to somehow find their address and send Morrison a letter. The couple were describing how much work Gacy must have done to be able to find their unlisted and secure address in such a manner of calm normality that I was freaking out on their behalf.

There is no running commentary on Profilers - Gaze Into The Abyss, it is a collection of scenes and stories that interlink amongst its chosen subjects and, for the most part, it is fascinating and informative and everything you want from a documentary of its type. It is filmed cinematically and so the lightning storm over the South African murder site immerses you like a movie would, but I do have one complaint. One small thing that made me feel left out slightly and that was the lack of some subtitles when these incredible men and women are speaking in their native tongue. The film starts with Finnish profiler Helinä Häkkänen-Nyholm in a taxi and I had to get a translation done of the conversation, which is basically the cabbie asking about her job and comparing her to Jodie Foster and Helinä replying something like “That’s just a film, reality is very different”. This is a great set up line for the entire film that I missed whilst watching, due to my lack of Finnish. There’s also a part where Stephan Harbort is on a train journey from Dusseldorf to Berlin with his big folder of crime on his table and he’s speaking German into his Dictaphone much to the surprise and disgust of the passengers around him. My German is good enough that I caught a lot of the words and could fill in the gaps, but as a casual viewer with no languages I think you are missing out on lots of details that would make the film a better experience for you just from something as small as not having subtitles. Other than that, what I understood was as disgusting and educational in equal measure as anything I have ever gotten from other such films and if you can follow the documentary without the subtitles then you are in for an epic yet gruesome ride.