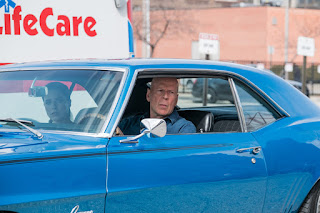 Watch the trailer for Acts of Violence, coming to DVD next month...

How far would you go for the one you love? For the MacGregor brothers, that question becomes a life-or-death decision that tests their strength, courage, and sense of family.

When Mia, the fiancée of Roman MacGregor (Ashton Holmes), is abducted into a human trafficking ring, Roman and his brothers Brendan (Shawn Ashmore) and Deklan (Cole Hauser) decide to save Mia on their own. Brendan is the trio’s big-hearted protector, and Deklan is the troubled war vet trying to find his footing. They’re guided by Det. Avery (Bruce Willis), the cop on the case whose sense of duty will be pushed to its limits. Behind the abductions and trafficking is snake-like overlord Maxwell Livingston (Mike Epps), a man who sees people as “products” and morality as weakness.

As the MacGregors sidestep official boundaries to rescue Mia, every second counts. But are they prepared for the ACTS OF VIOLENCE they’re about to experience?

Starring Bruce Willis (soon to be seen in the upcoming Death Wish remake and Die Hard Year One), Cole Hauser (Rogue, Olympus Has Fallen), Sophia Bush (Chicago Fire, One Tree Hill), Shawn Ashmore (X-Men, The Following) and Ashton Holmes (Revenge, A History of Violence). From the Producers of Wind River, Lone Survivor and End of Watch.