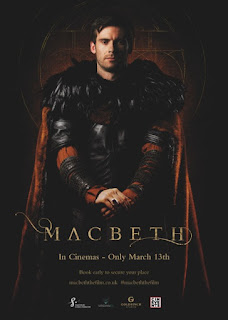 Ahead of the film's "one night only" screening in cinemas tomorrow (Tuesday 13th), Tony Cross caught up with Macbeth director Kit Monkman for an exclusive interview...

Entirely shot on green screen, The Scottish Play has been reinvented by director Kit Monkman in an exciting new film adaptation. Using background matte painting and computer modelling to generate the world in which the action plays out, the green screen allows Monkman to create his vision of a multi-tiered globe in which the characters play out their various fates. Imagine a mini Death Star a la Star Wars across the levels of which the camera drifts and zooms in on various action and key characters. The fluidity of the cameras’ movement around this globe aims to give the audience a constant perspective of the action as opposed to individual, isolated scenes.


Starring Mark Rowley, (The Last Kingdom, Luther) Monkman’s unique adaptation successfully bridges the gap between theatre and film to create a wholly new type of imaginative space. This radical new adaptation puts the audience’s engagement with the story centre-stage, amplifying the theatrical context of the original and creating truly innovative and thrilling cinematic vistas, whilst maintaining the language and themes of Shakespeare’s original play.

Firstly, congratulations on a beautiful and innovative film and thank you very much for taking the time to answer a few questions. Why specifically choose Macbeth for this? Did you want to try the CGI approach before you decided on Macbeth or was it Macbeth that decided the approach?

Thank you! I had co-directed a film called The Knife that Killed Me which was a very stylised, 100% green-screen film. It was experimental and perhaps a bit uneven, but I felt that the visual language that it had started to explore was well worth pursuing further. I wanted to find an idea that could embrace the artificiality and abstraction of theatre and invite the audience into a collaborative relationship with the cinematic image. Macbeth, as a dark and interior story and one that is so well known, seemed like a perfect play to adapt.

The source material is so well known so I have to ask, what were the thought process behind moving ‘Tomorrow and Tomorrow and Tomorrow’ to the end of the film? Actually, to a broader version of that question, what made you decide to cut scenes, e.g. the Porter’s knock-knock scene or move them and how did you decide what stayed and what went?

Of course, adapting a Shakespeare play (almost) inevitably means compressing it. That, combined with the inevitable point-of-view that any worthwhile adaptation must take to the original text (which, as you say, is so well known), makes those choices the fundamental building-blocks of any one film’s response, not only to the original play, but to all the other filmed versions that have preceded it. There is no such thing as a virgin interpretation of an established play; all new productions consciously or otherwise mediate between the present moment of performance and a set of preceding interpretations of that work. Creating a new film version of a Shakespeare play - alongside the primary drive to tell a compelling story well - becomes a daunting but fascinating game of cultural allusion.

So, our Porter loses all of his original lines but remains as a peripheral, unspeaking figure in many scenes. He acts as a conduit between the drama on-screen and the play's cultural heritage (he watches - despite interruptions - a silent, black and white, version of Macbeth from 1909). Through his wry acts of observing, informed as these are by his superior knowledge of what happens in Macbeth, he inevitably also acts in part as an on-screen proxy for us.

We moved the 'tomorrow and tomorrow and tomorrow' speech to emphasise that our Macbeth is in the enthral of supernatural forces as a choice, to justify his ambition (the supernatural in our adaptation presents itself as no more than coincidence). The speech seemed to me to be the perfect underscoring of Macbeth's decision to 'let go' and reconcile himself with his actions.

The film definitely has an interesting feel to it – as if you’re drifting through time and space – was that what you were aiming for? It feels both theatrical and cinematic at the same time.

I want to make films that reignite the imaginative participation of the audience, films that celebrate theatricality, make-believe, and thrive on the viewers' co-creation of what unfolds. So, yes, that hybrid between theatre and cinema is very much what I was aiming for.

Thinking more about the look of the film, how did you decide on the style and era? With CGI at your disposal it seems like the only limit would be imagination. Also how did you go about casting for the film and do you think using the CGI approach had an impact on the actors and their performances?

Macbeth is a C17th play set in an imagined C11th Scotland with a rich performance tradition from the C17th to the C21st. By building the theatrical, abstracted world that green-screen allowed us we created a story-space which, while it nods in many historical directions, is essentially self-contained. This also allowed us to cast freely from the best actors available to us; regardless of ethnicity. I hope that, once the audience has settled into the ‘rules’ of our world, the human drama becomes the primary focus. 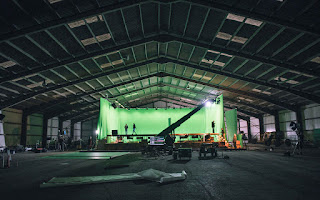 I’m sure that the technicalities of using a CGI approach presented as many challenges as it did opportunities. How complex was the process?

Building any 100% green-screen film is a complex business. The style of use of green screen in this film, however, breaks from convention in innovative ways. The film’s photography places the audience locatably in space, viewing the action from a fixed perspective in ways analogous to actually being in a physical space and watching a live event. This is a significant break from the codes of mainstream cinema that typically offer multiple perspectives on a film subject. The theatrically fixed perspective on scenes also throws into relief the exploratory dynamism of the roving shots that mark the transitions between scenes and the shift from one space to another. Stitching together these roving shots as the camera moves around the globe was, perhaps, the trickiest technical part of the process.

Would you do it again or is it a case of “been there done that” now and on to something new? What is next on the cards for Kit Monkman?

I feel that this visual language and its potential are still evolving. The next film will certainly build on what we’ve learnt. That said, expect the evolution to be a dramatic one!

Visit the Macbeth website for more information and to book tickets. Get a taster of the film from the trailer below:


Many thanks to Kit Monkman for taking the time to answer questions.