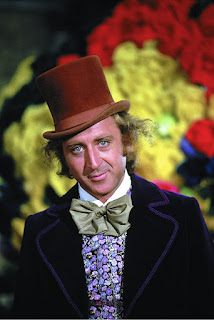 Our small band of Gunters here in The DreamCage universe are reviewing every film mentioned in Ernest Cline's Ready Player One. This week Steve Taylor-Bryant gets creeped out by chocolate…

The world is astounded when Willy Wonka, for years a recluse in his factory, announces that five lucky people will be given a tour of the factory, shown all the secrets of his amazing candy, and one will win a lifetime supply of Wonka chocolate. Nobody wants the prize more than young Charlie, but as his family is so poor that buying even one bar of chocolate is a treat, buying enough bars to find one of the five golden tickets is unlikely in the extreme. But in movie land, magic can happen. Charlie, along with four somewhat odious other children, get the chance of a lifetime and a tour of the factory. Along the way, mild disasters befall each of the odious children, but can Charlie beat the odds and grab the brass ring?

Thirty four years before Tim Burton directed Pirates of the Chocolate Ed Wood Wonderland there was a version of the Roald Dahl classic story that nearly won an Oscar. It’s the version of Willy Wonka that my generation grew up with and reminds me a lot of the “Don’t talk to strangers” videos in primary school in the 1980’s. Tim Burton and Johnny Depp made the story of Charlie visiting the reclusive Willy Wonka aesthetically weird, it looked creepy but was pretty harmless underneath it all. However, the original Mel Stuart directed film was genuinely creepy. I was seven when I first saw Willy Wonka & the Chocolate Factory, I was at my Nan and granddad’s house in Luton. It was 1982 and we were shortly to move to Germany so were visiting all the family before my dad was posted. When my Mum and my Nan went shopping, my Grandad let me watch Bruce Lee films and classic old war movies but when Mum returned we had to watch ‘child friendly’ films. Willy Wonka & the Chocolate Factory was child friendly. You’re seven, you have no life experience, and you have been protected from the bad things in life by your parents and your teachers. The story of Charlie and his Grandad winning the last ticket to visit the factory as a child is full of fun. It was colourful, it was an adventure the likes of which we hadn’t seen since The Wizard of Oz. It had mean bully children getting their comeuppance, it had greedy kids being punished for their greed and it had a hero, the nice child that, at seven, you all think you are. It was a blast to watch, you giggled for an hour and a half and then when it finished you moved on. You didn’t know why, or care if you’re honest, why your granddad looked absolutely horrified come the end.

As an adult, however, you are very aware of how the world works, you have experienced loss and grief, greed and violence, and you know that creepy old guys that own a chocolate factory shouldn’t be allowed near children. You are very aware that you have just watched a snuff movie. There, I said it. Willy Wonka & the Chocolate Factory is torture porn dressed up as a children’s film. A weird reclusive man invites five kids to his big creepy building and then proceeds to knock them off in strange and detestable ways. But children aren’t dumb. Honestly, granddad, I saw all this as a seven year old, I knew the fat kid was going to die because he couldn’t stop eating, I just didn’t care because the film was so well made. There are not many films of any era for children that don’t seem to be short of financial support. Children’s films are a studio afterthought, a demographic that they don’t care about, it’s a whole generational problem the studios are like the lazy parent ‘put a cartoon on the kid will be fine’ so, when someone makes a film like Willy Wonka & the Chocolate Factory, it is a child’s first experience of visual art. It is so different, so magnificent, so funny and charming, so unlike anything else we as children got to watch that if a few naughty children get killed by the creepy old dude who really cares? We need to protect our children of course we do, I have five kids myself and I would die for any one of them rather than let something hurt them, but through the medium of film we can give them messages, we can explain that greed is not good, that bullying and being mean is not the right course to live your life on, we can touch on death and loss and prepare them for the inevitable grief they will go through in later life. I went to my first funeral aged eight and have now been to forty three in total in my forty two years on the planet, so coping with grief is something I passionately believe needs to start at a younger age. We can cuddle our kids on the couch and give them morality lessons all we want but they need a little of the darkness that life offers for them to realise why the ethics we are trying to instil in them are so needed.

So let’s make more Willy Wonka type films, let’s dress up some hideous issues in cotton candy fun and japes, and let’s stop treating our children like they’re stupid. Willy Wonka & the Chocolate Factory is a life lesson, wrapped up in a family comedy, wrapped up in an aesthetically pleasing way. It’s a classic for children because the of the bad things happening albeit in a humorous way, and it’s a chance for us as adults to sit and marvel at children’s defence mechanisms and still feel like we are helping them.