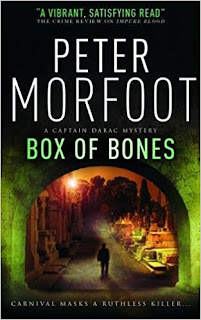 Is it all nice in Nice? Susan Omand read Box of Bones, the third novel in Peter Morfoot’s Captain Darac series from Titan Books...

Before I start, a caveat which may well make a difference. This is the third of the Captain Darac books and I haven’t read the other two so this was my jumping in point to the series.

It is Carnival time in Nice, and for three weeks the boulevards are alive with dancers, jugglers and musicians. Amid the colour and pageantry, a man suffers a fatal fall – the first in a series of suspicious deaths. Captain Paul Darac of the Brigade Criminelle is sure the answer lies in the mystery surrounding a daring bank heist, supposedly resolved years ago. But the reopening of the case rattles his usually equable relationship with his boss, and soon the safety of his friends, his colleagues and his family is at stake.

I’m not altogether sure why I didn’t get on with this book as well as I’d anticipated. Maybe I was expecting too much, maybe I needed the backstop of having read the previous novels to be up to speed on the characters, or maybe I needed a better understanding in general of the people and ambience of modern-day South of France in order for it to trigger memories, associations and reference points to really pull me in, but Box of Bones wasn’t the witty and gripping page-turner I’d been hoping for.

That’s not to say there wasn’t a lot of action in the book though, as the main cold-case crime was an incredibly ingenious one, well thought out and intelligently executed and the set-up towards re-opening the case was cleverly built with the procedural around solving the case remaining interesting if not entirely enthralling. However, the several side strands that were interwoven seemed to add very little, neither rounding out characters or furthering the main story. As I say, it could be because I wasn’t engaged with the characters to begin with and this may be different for people who have followed the book series from the start. I especially found the Guitar sub-plot annoying though with the interactions of wannabe mayor Telonne and his daughter not being at all believable, while the other sub-strands seemed superfluous, although they may have been part of a longer story arc stemming from the first two books in the series. The other characters in the book were fine on the surface, although I found that, even at the end of the book, I didn’t know enough about them to really become invested in their fates, they were just names on the page.

I realise I may be doing Box of Bones a disservice by using it as a jumping in point for an established series and this book could be exactly what fans of Captain Darac et al are looking for – as I say the main story itself was fine. It just didn’t capture my imagination enough to want to read the earlier books to find out.

Box of Bones is out now.