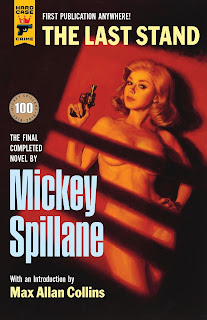 Tony Cross finds his fedora and goes full-on noir voice-over after reading The Last Stand by Mickey Spillane thanks to Titan Books...

The room was small. Too small. The bed unmade. It was too hot. Especially for April. I put the book down. A hardback, hardboiled detective story. Wrapped in a cover that had a history. A dame, naked but for the jagged shadows of a blind. She was holding a gun. Women were often dangerous in Spillane’s world. Dangerous and there to be gazed at. Their curves a temptation.

I looked at the book. There were two stories here, although this wasn't the sort of hardback you could beat a man to death with. It was compact. Enough to do serious damage to a lazy mouse perhaps.

I wiped the sweat from my brow. Damn it was hot. And Spillane’s writing has a knack of getting under your skin. Everything in this mean town starts to look tinged with noir. It's not exactly Chinatown, but it might be.

It's a world of corruption. Of policemen and politicians owned by the mob. And down these streets a man must walk. A man of honour in a dishonourable world. A man who will follow the case to its god-damn end even if it costs him his life. The bad guys could be hiding in plain sight. They might even be women. There are twists. Turns. There's violence. Bloody painful violence. The hero will be set-up, double-crossed and beaten-up. Death, or the threat of death, lurks one every page.

Then there's vengeance. A big word in a little world. Vengeance is a big motivator for the good guy. A line has been crossed. A dirty deed done dirt cheap. It must be avenged. Its perpetrators punished. Violently.

I picked up the book nervously. Its cover slipping slightly. Neither of these stories featured Spillane’s greatest creation, Mike Hammer, who has faded from modern memory slightly. The first, shorter, story, ‘A Bullet for Satisfaction’, is told in that first-person style that first leaps to mind when you think of the great American Detectives. It’s a blisteringly paced tale of a man doing the right thing. Despite the distractions of broads, booze and beatings. It’s good, but not great.

I suppose now is the time to fess up. These aren't pure Spillane. They were unfinished when he died. And his friend, Max Allan Collins, has worked them into publication. You’d never know another writer’s hand was at work. Collins has written a fine introduction. It sounds like The Last Stand was a finished work and that all Collins did was make the alterations that Spillane had outlined.

I got up and poured myself a heavy shot of whisky. There’s always alcohol here too. You can smell the whisky on its breath.

If ‘A Bullet for Satisfaction’ feels like a walk through familiar streets, then ‘The Last Stand’ is something different. A more modern story. It’s packed with dialogue, which tells the story. It’s a couple of paragraphs off being a screenplay. It’s also not an urban story. It’s out in the desert. On an Indian reservation.

I lifted my eyes to the shelves that towered over me looking for that solid slab of plastic that is ‘The Complete X-Files’. That’s what’s odd about ‘The Last Stand’. It feels like Spillane has been watching too many episodes of the Season Two and Three X-Files stirred in with the books of Tony Hillerman. It’s Spillane but lacking a little character. Don’t get me wrong. This is a well-told story. There’s a woman. Obviously. A woman that the middle-aged hero falls for. Her name, Running Fox.

I swigged my whisky. Damn, you couldn’t make this shit up.

Running Fox is a gorgeous piece of exotic womanhood and frankly I don’t know how I feel about the way she’s written. She’s no fool. She’s not just eye candy. Whatever. Perhaps I’m just getting old.

I looked at my watch. Whichever way you looked at it I was alone in a room in Acton and no one was sending gorgeous women here tonight. But neither was anyone likely to try to kill me. At least not again. I’d sent the last man who tried back to his slime ball boss with a headache that even paracetamol couldn’t cure.

Credit where its due though, ‘The Last Stand’ is a page turner. It just doesn’t feel very Spillane. Then again this is a later Spillane. A more mellow kind of noir. It’s not even noir. It’s a good little story.

I looked at the book again. Whatever I thought of it the style had got to me like that first girl you ever truly loved. You know she’s gone. You know that what you remember was never how it really was. The summer was never as sun-drenched as that. You were never as handsome. But she will always be beautiful, and you will always feel something for her that you’ll never shake off.

I raised my glass to a master of the craft.

Then the doorbell rang, and nothing was ever the same again.