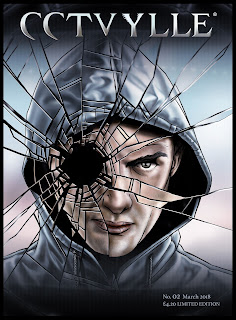 The third issue of CCTVYLLE from award-winning artist and film-maker Gianluca Bonomo is out now...

Way back in the mists of, well, just over a year ago, we told you about a comics Kickstarter that featured some spectacular work by series creator Gianluca Bonomo and the CCTVYLLE Collective and now, thanks to a successful campaign, the new issue has hit the shelves.

If you don't know the series, here's the general premise:

Set in a London of the not too distant future, CCTVYLLE™ narrates the dramatic and controversial consequences of living under the suffocating control of thousands of super-smart hybrid birds belonging to a government-run agency. The hybrids embody half machine and half animal (bird), consisting of a very sophisticated cctv-like camera build that boosts an intelligent cybernetic chip while the bird’s wings, bones and tissues are organic. The hybrids or “cctvirds” are often remotely controlled by appointed operators whose duty is to constantly patrol the town preventing and reporting crime. Like for any technology or powerful invention, the borderline between use and misuse is very thin and often does not exist. Within a short period the hybrids become so dominant that no picture or view of the city is without them.

CCTVYLLE™ highlights the stories of people whose lives become irreversibly affected by an overly paranoid and controlling system and takes us through a dramatic and exciting journey to discover a new world of ordinary and extraordinary heroes.

In this, the third issue in the series of 5 comics (which confusingly called #02 because we started with the prelude at #00) there's a few unexpected twists & turns and a new character who has decided to help Sean, Claire and Damien to get into action but, in order to do so, she has to confront pretty much everyone. Sean also seems to be going through a crucially difficult moment. Is he really ready to face reality and take some strong decisions?

Have a look at a couple of pages of the interior artwork to see how amazing the finished comic looks. 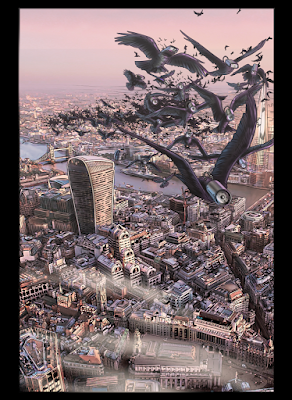 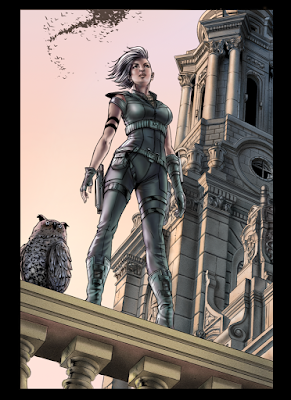 You can find out more about the full CCTVYLLE project and buy the new issue on their website at http://www.cctvylle.com/shop/#comics as well as comic-cons and the printed new issue can currently be found at Orbital Comics store in central London and at Legacy Comics in Halifax.