Doctor Who - Bad Wolf & The Parting of the Ways 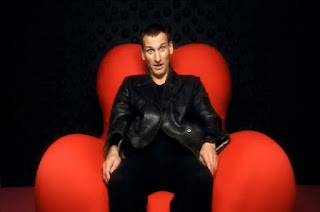 Our Doctor Who expert, Tony Cross, is journeying through all of time and space to bring us his thoughts on every available Doctor Episode. Today is the Ninth Doctor adventures Bad Wolf and The Parting of the Ways...

So that was the Christopher Eccleston era that was. Thirteen episodes. Gone in a flash. In a way it seems worse that Paul McGann, who at least has had a long healthy Doctor Who existence in book and audio form. Eccleston's era just ended.

I'm not going to review the era here.

Bad Wolf and The Parting of the Ways bring things to an epic climax. The Bad Wolf loose end is tied up - even if it does seem a rather perfunctory kind of story arc); Captain Jack is killed and then undeaded and abandoned; the Daleks return and are destroyed - again; Rose is sent to safety; is horrible to Mickey and then comes riding to the rescue. It's all rather wonderful in its way and Eccleston's regeneration is nicely done.

There are some great moments throughout. The realisation that The Doctor, Captain Jack and Rose have been dropped into separate future versions of various British television game shows and the gradual creeping realisation that they're fatal (Something I've often hoped for television. If that makes me evil, then I'm evil.) The Doctor teams up with the 'nice' Lynda Moss (Jo Joyner) but Rose gets caught up on the weakest link with the devious and rather cowardly Roderick (Patterson Joseph). If there's one thing that Doctor Who doesn't like, it is a coward. Captain Jack meanwhile gets naked, flirty and produces a gun from a rather uncomfortable location.

There's a lot of characters but most of them are doomed to die. It's one of those stories and like a war film we get a scattered hint of personality here and there to give their deaths a bit more emotional oomph. It is Lynda's death. Lynda had looked like a potential companion. The Doctor had promised to get her out of there. But she dies. She's nice. And she dies. It's a sign that when faced with the Daleks the Doctor might win but he - and his friends - always must pay a price.

The build up to the cliff-hanger at the end of Episode One is exceptional and Eccleston's response to the Dalek threat is beautifully Doctor-ish (even if he does sort of steal a line from Absalom Daak, Dalek Killer) but I remember the first time I watched this that my little rush of geek excitement when Rose comes too and you hear that familiar heart-beat hum of a Dalek spacecraft. Decades of Doctor Who watching in a special sound. How wonderful is that? I almost cheered.

There's Rose's brilliant speech in the chip shop about having learnt a better way of life from the Doctor - and knowingly pointing out to Mickey that he knows this too. It's the one thing I've learnt from the Doctor too. Sometimes you need to make a stand. To say no. Even if it is only you are doing it. The Doctor's demonstrated it on countless occasions but freshly to Rose. Her frustration is great, and I like Billie Piper throughout this. Her slightly jealous look at the Doctor's friendliness with Lynda. Her refusal to give up. It's good stuff and genuinely emotional too: when she talks to her Mum about meeting her Dad. 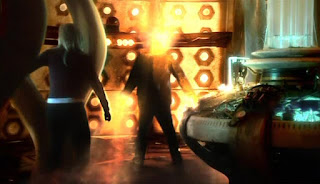 Eccleston himself is on excellent form throughout. I still think he does the darker stuff better than the more humorous, but the final 'fantastic' speech is...well...fantastic, even if Rose is as confused as hell about what's about to happen. The regeneration is rather impressively explosive too (although there's more where that comes from).

John Barrowman gets to do good Captain Jack and I like the Doctor telling him off for flirting as soon as he says anything to anyone and I also like the fact that Captain Jack's farewell kiss to Rose is followed, almost unremarked by his farewell kiss to the Doctor. There's no fanfare, no 'ooh look epic gay moment', it is a matter of fact goodbye kiss. More grist for the gay agenda mill but to me it felt like the 'right' thing for Captain Jack at that point. I don't think a manly hug would have been quite the thing.

The Daleks are pretty bog standard here except for the insane Emperor Dalek who seems to believe his own hype, even if he sounds great. They're not able to be as cunning as they often are. This time they get just to be ruthless, almost unstoppable killing machines. But they've never looked more epic. Hundreds of saucers, thousands of Daleks. This is the kind of stuff we wanted from a new series. No piddling around in single ships over Bedfordshire. Here's hundreds of the buggers off to destroy the Earth in the name of an insane Emperor. They're going to create hell and call it paradise. It's is, to be all childishly enthusiastic - brilliant. Or should that be fantastic.

The questions as to whether the get out is a bit too convenient - it is (almost) literally a ghost in the machine - is a moot point. It works. RTD had signposted the power of the TARDIS's 'heart' in Boom Town, which makes this feel a little more legitimate.

So I really enjoyed these episodes. Bad Wolf nicely ratcheted up the tension and has a great cliff-hanger whilst The Parting of the Ways gives us some genuinely emotional moments. A fantastic end to the Eccleston era but to me it felt too soon. Perhaps though this was the perfect arc for the post-Time War Doctor (and heaven knows how many off screen adventures they've had).