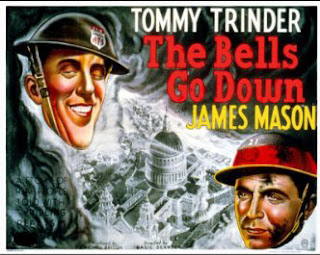 Tony Cross starts a new series of articles on films and books portraying Britain in the Second World War with a look at two contrasting films about the Auxiliary Fire Service in The Bells Go Down and Fires Were Started...

‘The Bells Go Down’ is about firefighters starring Tommy Trinder and James Mason. Trinder, who you might not be familiar with, was an English comedian who had established himself just before the war had begun. His role means that ‘The Bells Go Down’ has, particularly, in the beginning a slightly more light-hearted tone than the Humphrey Jennings film ‘Fires Were Started’, which also came out in 1943 and tells a similar story but in a more docu-drama format. The cast of ‘The Bells Go Down’ are all actors, the cast of ‘Fires Were Started’ are actual fire service men and women. They make for an interesting double-bill.

‘The Bells Go Down’ tells the story of Tommy (Trinder), Ted (James Mason), Bob (Philip Friend) and his wife Nan (Phillipa Hiatt) and Sam (Mervyn Johns) with Brooks (William Hartnell), a former International Brigade soldier as a lesser character with an important role. It is Brooks who brings the first serious note to proceedings when, on their first night as newly signed up members of the AFS (Auxiliary Fire Service), they bed down for the night. Brooks roles out his experience of the bombing of Madrid. Hartnell blows everyone else of the screen at that point and pops up throughout the rest of the film as the voice of experience and seriousness.

Tommy is mainly played as a figure of fun, although also as one of those English comedians who is somehow both odd looking and a magnet for the opposite sex. Ted was in the Fire Brigade before the war began and is forced to train the new AFS crew. His job is to be a figure of discipline and seriousness in the face of Tommy’s larking about. I don’t think James Mason probably saw it as one of his more challenging roles. Bob and Nan are a couple. They’re not too wealthy and about to marry when the war begins, but initially they put this off until later in the film. Bob and Nan are the two characters you spend most of the film really worrying about.

Sam (Mervyn Johns) is an unusual nod to reality. He’s a criminal, basically. He’s not played as nasty, but he is a thief constantly pursued by a local copper. And he’s still stealing as the war goes on. But he’s as much part of the team as the rest of them.

And this is a film about how a group of men get made into a unit capable of facing up to any challenge. With one addition. It also shows how they local community sticks together in the face of the challenges of war. Ted’s parents run a local pub and Tommy’s Ma runs a chippy. There’s a sub-plot about a greyhound. Nan and Bob find a flat. Nan gets pregnant. As the Blitz begins properly everyone rallies round and keeps an eye on each other.

It’s not always serious but it has a serious objective in mind: showing what the British people – or Londoners in particular – can do when they work together. Not everything seems realistic, but you really do find yourself rooting for these people, particularly Bob and Nan. Its also about the sacrifices people make.

By the time this film came out the worst of the Blitz was over, although there would be a wave of attacks from V1s and V2s to come so this is an early attempt to show it like it was. The real story of the Blitz perhaps isn’t as glorious as we might like but the people of London – and other cities in Britain – lived a life we might struggle to comprehend, and this film is a – relatively – light-hearted attempt to tell that story. 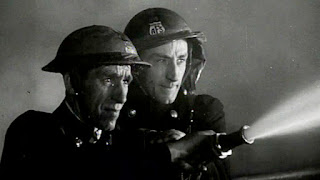 A more serious telling of the same story is found in ‘Fires Were Started’. There’s no Tommy Trinder and his greyhound there to amuse us, but it tells a similar story of people coming together to help win. ‘Fires Were Started’ is a 1943 film directed and written by Humphrey Jenkins and starring real fire fighters and fire service staff. It was made under the auspices of the Crown Film Unit and is as much documentary as it is a drama.

It follows the lives of one group of fire fighters on a full-moon lit night during the Blitz. In many respects it feels like a typical wartime film as it sets up : a new member is added to the crew, one man's wife tells him not to go off and do something silly, there's a bit of a sing-a-long and a nice mix of classes.

But once we get to the fire itself it feels almost like a documentary and it's terrifying. What's most terrifying is watching these men go up against a huge warehouse fire with the most basic of equipment - no breathing masks for example.* It's a fantastic portrayal of the matter-of-fact danger that they faced on a daily basis and the risks they were taking.

The way the film also shows how - as the size of the fire grows - that the behind the scenes support kicks into action and more pumps arrive, including from 60 miles away from where the fire began. It's an illustration of the size of the problem and the staff involved.

As with most films of the period everyone seems to display a phlegmatic calm that might once have been described as 'typically British'. How true that was in the flames and fear of the real thing I don't know. I'm not sure I would have been so calm.

The fire crew know they can't save the building they're standing around, but they are trying to save the ship nearby with its valuable cargo of weapons and ammunition soon to be sent off to help the troops. A war can't be won if all is lost here. It's emphasized at the end as we see the ship setting off from the docks and off to deliver its cargo, cross-cut with the funeral of a fire fighter. Here, it seems to be saying, we are all in it together. When that phrase meant something.

If you've never seen it I'd recommend it. It's only 80 minutes long but it feels like a genuine slice of wartime life. Perhaps watch it with The Bells Go Down to contrast their two approaches. Jennings is aiming for a more documentary feel and the fire scenes feel like you're watching a documentary rather than a drama.

The reality of the Blitz was probably far worse than either film can reveal, as the account by Cyril Demarne, who was one of the real firefighters used as actors in ‘Fires Were Started’, of his experience dealing with a bus in Forest Gate reveals. London was bombed for 57 consecutive nights, starting on 7 September 1940. It is hard for us sitting here seventy-five years later for us to imagine what that must have been like, but these films give us a snap shoot of how we wanted to portray ourselves at the time and what mattered.

Perhaps it is time for us to put aside all those films about Winston Churchill and go back to these types of films instead. The Second World War was – to use the title of Angus Calder’s excellent book – ‘The People’s War’ and perhaps it is time we tried to tell the stories of the ordinary people again. Warts and all. Perhaps the nearest I’ve seen to it recently was the under-rated ‘Their Finest’, which seemed to be a story edging towards being about ordinary people. Certainly, Gemma Arterton’s Catrin – despite her artistic/bohemian life – is a person that feels and acts like a real person and isn’t Super-Churchill saviour of us all.

The truth is that, whilst Churchill did, turn the English language into a weapon and whilst we were led by ‘great men’ in and out of uniform the war was won by ordinary men and women who just got on with things. They weren’t perfect. They were just us. We need more stories about them.

* There's a fantastic of its time moment where the water pressure drops on the hose that one group of fire fighters are using on the roof and whilst they wait one of the firemen lights up a cigarette. In fact, in both this and ‘The Bells Go Down’ characters go off to smoke cigarettes at spectacularly inopportune moments. It almost gets Tommy Trinder killed in ‘The Bells Go Down’. The past is indeed a foreign country.