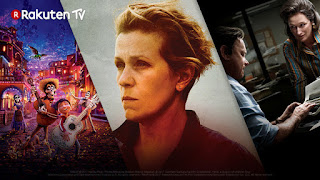 New titles will be available in May for UHD 4K HDR quality for Smart TVs - presenting the latest films with a genuine cinematic experience for all film lovers at home, including: The Florida Project which picked up an Academy Award nomination for Willem Dafoe in the Best Performance by an Actor in a Supporting Role; Ridley Scott’s All the Money in the World starring Christopher Plummer, Michelle Williams and Mark Wahlberg. Also, available is Roman J. Israel, Esq., starring Denzel Washington, Colin Farrell and Carmen Ejogo which also saw an Oscar nomination for Denzel Washington in the Best Supporting Actor category, as well as Jennifer Peedom’s Mountain– a truly cinematic experience about the highest peaks around the world featuring narration from Willem Dafoe.

Some of the Awards Season’s biggest winners are also coming to Rakuten TV. Three Billboards Outside Ebbing, Missouri featuring Academy Award-winning performances by Leading Actress Frances McDormand and Best Supporting Actor winner Sam Rockwell will be available from early May on Rakuten TV. Also, featured is Steven Spielberg’s The Post starring Meryl Streep and Tom Hanks about a cover-up that spanned four U.S. Presidents and pushed the country's first female newspaper publisher and a hard-driving editor to join an unprecedented battle between the press and the government.

Additional new May highlights include the next horror instalment in the franchise: Insidious: The Last Key; Maze Runner: The Death Cure and Early Man starring Tom Hiddleston, Eddie Redmayne and Maisie Williams.


All these titles will be available through Rakuten TV on Smart TVs, tablets, PCs and consoles in the best audiovisual quality. Rakuten TV currently provides an extensive catalogue of the latest movies and classic films to their users in the UK, for a cinema experience in their own home on a pay per view, rather than subscription, basis so you only pay for the films you watch, not a set fee per month.
Head here to sign up and watch without the need for a monthly subscription.

Other New Releases in May

Rakuten TV – “Your cinema at home”
Email ThisBlogThis!Share to TwitterShare to Facebook