Film - We Dive At Dawn 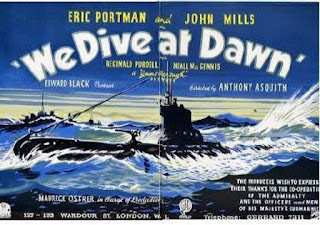 Tony Cross continues his series of articles on films and books portraying Britain in the Second World War and battens the hatches to watch We Dive At Dawn (1943)...

So, we’ve had the Fire Brigade, the RAF and now the Navy. This won’t be the last film featuring the navy I’ll be talking about either. Indeed, there’s at least two coming up that I can think of off the top of my head. One of which I think can claim not only to be one of the best war films ever made but also one of the great British films ever made, but that’s to come. Let us talk of ‘We Dive at Dawn’.

Directed by Anthony Asquith this tells the story of submarine P-16, Sea Tiger, and her crew. It’s a boy’s own adventure story about a special mission featuring German prisoners, German battleships and a pseudo-commando raid on a Danish port. Lots of Germans will die. But – spoilers – only one member of the British crew despite depth charges and machine guns. Whatever this is I suspect it isn’t anything like real warfare.

That doesn’t matter. The truth is war films of the 1940s can’t really afford to be absolutely realistic. No one fighting a real war really wants to see a real war in their cinemas. When you’re worrying about your survival and the survival of loved ones you want something that makes you feel like you’re on the right side. You know people die in war. It’s happening all around you, but really you don’t need to be reminded of it. So, the one British crew member who dies is one of the few that the film hasn’t really set up as a proper character in the films first half-an-hour.

So, we meet our crew led by John Mills as Lieutenant Taylor, Captain of the Sea Tiger who if implication is anything to go by is both incredibly wealthy and shagging half the women of England. Mills says he prepared for the role by going out on patrol aboard a submarine and tells amusing story about his experience in his autobiography, ‘Up in the Clouds Gentleman Please’, which I suspect we will revisit as we go. That’s because John Mills is an actor who will appear in many films on this list: ‘Waterloo Road’, ‘The Way to The Stars’, ‘The Colditz Story’, ‘Above Us the Waves’, ‘Dunkirk’, ‘Ice Cold in Alex’ and ‘I Was Monty’s Double’. I think I’ll save a longer John Mills chat for ‘Ice Cold in Alex’.

To be honest this film is pretty average in comparison to most of the rest of that list. Mills’s performance is on the light-side of serious, except in the strong scenes that surround the attack on the German Battleship, the Brandenburg, where he’s exceptional. 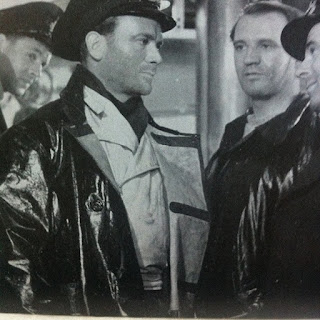 The first half-an-hour of film is a light-hearted(ish) introduction to the crew who, like Shakespeare’s Henry V, come in all accents. There’s an Irishman, Mike Corrigan – played by one of Britain’s most familiar Irish actors, Niall MacGinnis – who is due to get married to Dabbs (Reginald Purdell), the Coxwain’s sister but spends a lot of time trying to escape his fate; there’s the always rather terrifying Eric Portman as Hobson, a northern Englishman with a drink and marriage problem as well as the ability to speak fluent German, which might come in useful at some point. There’s a Scotsman, who is called Jock* (Cavan Watson). Jock seems to head up the Engine Room. And I’m wondering whether this might explain – and I admit this is tenuous – Scotty in Star Trek. Perhaps Scottish engineers will turn out to be a theme throughout these reviews. Let us see. There’s a brief Welshman, some Londoners and various other accents. We – the British – are all here. We are the Sea Tiger.

This is contrasted by three Germans we meet. They are Luftwaffe men captured by the Sea Tiger on route to their attack. One of them is played by a young Walter Gotell. These Germans do not stand up well compared to us British. As the submarine passes through a minefield two of them start to panic. One of them snaps and gives away the position of the Brandenburg. Gotell beats him nearly to death. Gotell is a bad German, but the other two aren’t exactly equipped with backbones. Indeed, the Germans throughout are pretty incompetent in the face of good old fashioned British grit. Gotell is good though.

There’s a lot to be entertained by in ‘We Dive At Dawn’, but it lacks a certain something that would mark it out as a great war film. I’m not sure what. Perhaps it is because it is tinged with a certain over-heroic unreality from this distance. Perhaps it is the odd tonal leap from the first half-an-hour. Perhaps it is that Eric Portman seems to be acting in a different film from everyone else. Portman’s performance isn’t bad at all but his character, Hobson, seems to have walked in from a play written by a 1950s angry young man. Like John Mills we will meet Eric Portman again in a later article. If you can guess which film that will be about you can award yourself a point.

So, a fun film but lacking depth, which is ironic when you think about it. ** I might be being harsh though. I think 1943 might have been the wrong point to release a film with the horrible realism of ‘Das Boot’ (1981). Although watching those two films in a double-bill might be interesting.

**Did I write this just to get the depth joke in. Perhaps I did. Perhaps I didn’t. I’m feeling confused by it. However, I’ll stick with it for the moment.