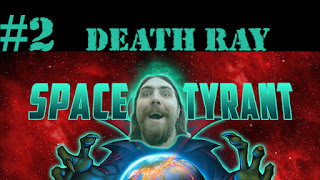 With spaceballs of steel, DJ Daze has nothing on the Defective Inspector in part 2 of his Let's Play of Space Tyrant by Blue Wizard Digital...

This time DI Space Tyrant eats some fruit, befriends the Hypno-toad and gets a Death Ray... did he mention that?

Watch all the Space Tyrant Episodes so far