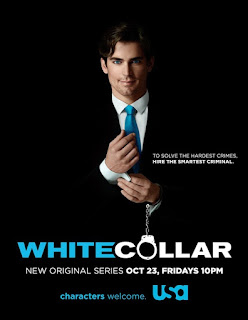 In a series of articles, Susan Omand and Steve Taylor-Bryant are going to remember the policemen, spies and criminal specialists that entertained them over the years. Today, Steve cons his way into some good old fashioned white collar crime...

Not everything that I have enjoyed over the years could be deemed as great. Yes, a lot of shows I tend to gravitate towards are award winning, high quality, expertly written dramas that have been years gestating and being perfected. Sometimes though I just want to have fun. I just want to enjoy something that is maybe pretty to look at but perhaps won’t hurt my brain dissecting it. Sometimes I just want to be entertained. White Collar falls between the two types of show, it’s pretty, it’s funny, it’s a cat and mouse that borders on generic but is more cleverly put together than it appears on the surface. But most of all it's entertaining.

Art forger extraordinaire Neal Caffrey (Matt Bomer) sees his reign as King of the Con come to an end when he is finally caught by the FBI’s white collar agent Peter Burke (Tim DeKay). With only a few months of his jail sentence for forging a bond to run, Neal escapes to try and stop his girlfriend Kate (Alexandra Daddario) from leaving, he’s worried she is in trouble. When he can’t find her, he surrenders to Burke and agrees to become a consultant, with an electronic and unbreakable tag on his ankle, whilst he serves out the now extended sentence he has. Moving into a rich widow’s house, he teams up with old friend Mozzie (Willie Garson), to occasionally help the Bureau, but mainly to help themselves. Neal is convinced that Kate is in trouble and tries to work behind Burke’s back to rectify many of his past indiscretions as they catch up to him, whilst helping Burke and the team trace confidence artists, financial fraudsters, art thieves and forgers.

I loved White Collar but, for some reason, I could never complete the DVD collection. However, I've recently discovered that the entire six seasons are now on Netflix, so here I am binge-ing on an old favourite. The stories are great because they aren’t all concluded with gunfire. It's not a particularly violent show compared to other network series about law enforcement, it's about patience, stake outs, knowing your art history, essentially, it’s a show that sees the long con played out by both sides. Bomer as Caffrey is sort of a throwback to the ‘40s, wearing the great suits, rocking a hat, using charm and his smile to both fix and devastate situations. There is an almost cheesy charm about Bomer’s performance that I’d love to say is a bit over the top but, if I’m honest with myself, I would fall for every con he played on me. He’s that convincing, even when you know you’re being conned you’d still let it happen. DeKay is a bit growly, sullen, grumpy, and very distrusting towards Neal but at the same time they have a bond, like brothers have, that means he eventually only wants what is best for Neal; he worries and that adds a nice element to the television detective. The FBI crew are all well cast, Jones (Sharif Atkins), Cruz (Natalie Morales) in the early episodes, and Barrigan (Marsha Thomason) in the later ones, are all convincing as agents, whether in office situ or action, but it’s the non-law enforcement characters that I enjoy the most. The elusive and mysterious Kate that doesn’t appear for long allows you to start rooting for Caffrey. There is Alex (Gloria Votsis), the beautiful fence that doesn’t trust Caffrey either but can’t help herself when it comes to helping Caffrey. There is the aforementioned widow, whose husband himself was a conman, June (Diahann Carrol), who knows exactly what Caffrey is like and seems to enjoy the thrill of even being partially involved, and there is those along the way like Sara (Hilarie Burton) that impress. The criminals that Caffrey must chase down, many from his own murky past, are brilliantly creepy and exactly the type of criminals that you want to see on television with TV favourite Mark Sheppard as Curtis Hagen particularly impressing. Sheppard is great in everything though so that’s not surprising.

Towards the end of the eighty odd episodes, the plots and story arcs may get a little more outlandish than maybe is necessary but that can all be forgiven because, by then, you’ve invested so much time and emotion into Caffrey and Burke that you just want to see the story end well and with Au Revoir at the end of season six it really does end on a high.

There is much to deride on streaming and network television, there is only so much binging time in a day that sometimes its hard to pick a sure-fire enjoyment hit. Honestly, try White Collar. It’s worth your time.