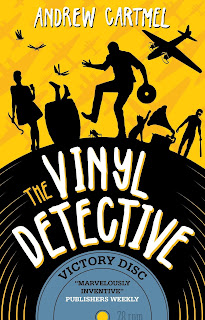 Tony Cross gives Andrew Cartmel's The Vinyl Detective another spin and reads the latest novel in the series, Victory Disc, out next week from Titan Books...

Victory Disc is the third – and final? – volume in the Vinyl Detective series. And the third is enjoyable as the others. Andrew Cartmel has found a groove that works.

Our familiar cast of characters are here: the still nameless Vinyl Detective himself, his girlfriend and partner Nevada, his tactless friend Tinkler, the taxi-driving Clean Head and annoying occasional visitor Stinky Stammer. We’re familiar with them all now, although I’d like to see more of Clean Head myself and less of Tinkler but we can’t always get what we want.

The story begins with a large speaker. We then – as is traditional – find the Vinyl Detective is hired to find some rare records. In this case not vinyl but shellac, for this mission is a search for 78s from a World War Two British dance band called The Flare Path Orchestra. Of course, this being the Vinyl Detective, nothing is simple.

There’s also some discussion of the morality of the Allied Bombing Campaign against Germany, which I might have much to say about if this was the time and place. Which it isn’t.

I have enjoyed each volume of this series immensely. They’re well-written, well-paced and entertaining. The people in them feel (mostly) like real people, although I’m always amused by geeks who are somehow irresistible to the opposite sex in a way that my experience of being a geek suggests isn’t reflective of real life. Or perhaps only of my life. (Woe! Woe! And thrice woe! Weeps.)

I’d think there’s still a bit more life in these characters, although how many Vinyl adventures one can have before you’re stretching the format to breaking point is moot. But then you could say that about the murder rate in Oxford or Midsomer or Cabot Cove. Part of the fun of detective stories is seeing familiar ingredients turned into something new.

So, Titan Books and Andrew Cartmel, I’m hoping we’ll see more of these at some point in the future, which says a lot about how much I enjoyed this. Recommend.

The Vinyl Detective, Victory Disc is published on 8th May