Hay Festival Wales events will be streamed live to public libraries for the first time thanks to a new collaboration with the British Library’s Living Knowledge Network...

The Living Knowledge Network is a nationwide partnership between the British Library and 22 major libraries in cities and towns across the UK. The Network combines local expertise and national organising power to share knowledge, resources and activities. At the heart of the Living Knowledge Network is a simple aspiration - to create value by sharing ideas and sparking connections between libraries, collections and people across the UK.

The new partnership follows last year’s announcement that the Hay Festival had donated its entire audio and video archive to the British Library to mark the Festival’s 30th anniversary.

Featuring over 600 of the world’s greatest writers, global policy makers, pioneers and innovators in 800 events across 11 days, the Festival showcases the latest ideas in the arts, sciences and current affairs, alongside a rich schedule of music, comedy and entertainment for all ages. A galaxy of literary stars gathers to launch new work, while the biggest ever HAYDAYS and #HAYYA programmes give young readers the opportunity to meet their heroes and get creative.

The Festival site is free to enter, with ticketed events in 10 tented venues, plus a range of sites to explore, including the Festival Bookshop; the HAYDAYS courtyard; the Hay Festival Wild Garden; creative workshops in the Make and Take Tent, the Scribblers Hut, The Cube and the Mess Tent; and market stalls, cafés and restaurants.

In an age increasingly characterised by abbreviated content and algorithmic recommendation, Hay Festival promotes serendipitous discovery through the long-form, immersive experience, offering a platform for informed conversation and the chance for inspiration to take hold.

The Festival runs a wide programme of education work supporting coming generations of writers and culturally hungry audiences of all ages – Hay Festival Wales opens with two free Schools Days of programming, the Beacons Project gives students aged 16–18 the chance to learn from internationally acclaimed writers, students in tertiary education can get free tickets, and Hay Compass is a special space on site to learn and discover, with free access to inspiring speakers.

Explore the 2018 programme and book tickets at hayfestival.org 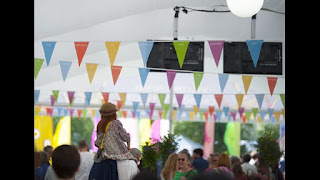