Are YOU 2000 AD's next Art Star? Comics artists have the chance to GET PAID for pin-ups for the legendary award-winning comic book...

Some of the biggest artists in comic books got their break at 2000 AD – and new rising art stars now have their chance to get their work into its pages AND get paid for it with a brand new art competition called 2000AD Art Stars.

‘Star Scans’ have been a staple of 2000 AD since its earliest days: single-page pin-ups of the greatest characters in the galaxy, from Judge Dredd and Strontium Dog to Dan Dare and Rogue Trooper, drawn by some of the best artists in comics from Brian Bolland and Dave Gibbons to Jock and Liam Sharp.

Budding AMATEUR comics artists can now submit their own ‘Star Scan’ pin-ups based on specific famous 2000 AD characters direct to Tharg himself – and the winner, chosen by the 2000 AD editorial droids, will be published in a future edition of the Galaxy’s Greatest Comic. PLUS they’ll be paid for their art, the same as any pro. Note the word Amateur - the terms of the competition (found here) state that "Entries will not be considered from professionals currently or previously working in the comic book industry, as adjudicated by 2000 AD." You have been warned! 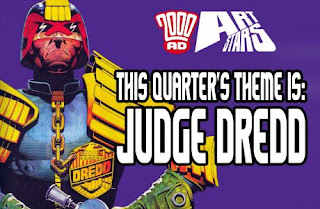 New themes will be announced every four months and the theme for the first 2000 AD Art Stars competition which runs until 9th September is: JUDGE DREDD

Matt Smith, editor of 2000 AD, said: “2000 AD has a four-decade-long legacy of finding some of the biggest talents in comic books and we’re always on the hunt for new creators. Our usual open submissions are solely for sequential work, but 2000 AD Art Stars is a simple, direct way for budding artists to show off their skills and impress both us and our readers! We’re looking for interesting, polished pin-ups that show knowledge of the character, a good appreciation of anatomy and perspective, and a strong, confident style. This is the ideal opportunity for people to flex their artistic muscles and maybe find their break in the comic book industry. 2000 AD remains committed to discovering new comic book talent and this competition runs alongside our usual open submissions window as well as the very popular art and script competitions at the Thought Bubble convention in September.”

This is an incredible chance to follow in the footsteps of some of comics’ greatest artistic talents and, who knows, maybe become part of the next generation of 2000 AD artists redefining the comic book industry!

Budding ‘art droids’ can submit their Judge Dredd-themed 2000 AD Art Star entry now at http://bit.do/2000adartcomp. Entries for round one are open until 9th September 2018. Terms and conditions apply. Find out more on the 2000AD website.


You can also follow the competition on 2000 AD’s social media at: