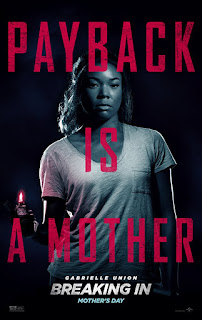 Ren Zelen dodges the surveillance cameras to go and watch Breaking In...

When her estranged father, a stinking-rich, white-collar criminal, is mown down by a car on the eve of his court sentencing, under circumstances which, strange to say, no-one finds suspicious, our heroine Shaun (Gabrielle Union) takes her two kids to spend the weekend on the implausibly vast and luxurious rural Wisconsin property where she was raised, in order to prepare for its sale.

Leaving her devoted husband, who is lovingly apologetic (naturally) at having to stay in the city and work over the weekend at his (unspecified) high-powered job, dedicated mother Shaun and her two kids - youngster Glover (Seth Carr) and phone-addicted teenager Jasmine - (Ajiona Alexus), arrive at the house to find the alarm unexpectedly disabled.

They put this down to a power outage, and tech-savvy Glover goes up to investigate the state-of-the-art, high-tech security system which surrounds the house. This includes surveillance cameras, a lockdown shield system, and even a drone which can fly around checking out the numerous rooms and corridors.

However, Mom Shaun barely has the chance to make a few calls and finish a glass of wine before it transpires that they are not alone after all – the house has already been infiltrated by four ex-cons.

It turns out that Shaun’s shady dad had liquidated his assets and stored a cool $4 million in a safe hidden somewhere in his extensive country mansion. The felons were not expecting to be interrupted in their search and they are also subject to a ‘ticking-clock’, as they have only 90 minutes to find the money before the local police show up – a failsafe after the alarm has been disabled.

While Shaun is out on the patio the assailants grab her children and try to extricate any information they may have about the location of the safe. Meanwhile, they send out Luke to get the mom.

However, Mom is not quite so easy to apprehend, and after a scuffle utilising a broken wine glass, and a chase into the woods, Luke is incapacitated and tied up, leaving Shaun free to return to the property. But now Mom is on the outside of her fortress of a house, having to break her way in, as her kids are being held hostage inside - hence the title of the film - a novel reversal of the usual house-siege situation.

To remind us all of Shaun’s particular predicament, Eddie spells it out for her in their first verbal exchange - “You’re a woman, alone at the mercy of strangers, and your greatest weakness is locked inside this house.”

It’s a rather contrived premise, but still intriguing, offering various tense scenarios as Shaun concocts schemes to save her kids. She’s clever and resourceful and uses her superior knowledge of the house and terrain to her advantage. Because of Shaun’s knowledge of the house and its environs, and her unexpected tenacity, the villains are often caught on the back foot, and are forced to improvise responses to her attempts, with mixed results.

Likewise, some of Shaun’s plans work, some of them don’t, but she is almost certainly more ingenious than the typical mom at the school gates – perhaps she is more her father’s daughter than she would like to admit?

Her ingenuity however, prompts a supremely corny, cringe-worthy moment of dialogue when Eddie faces Shaun in the final stand-off. He is moved to admit he underestimated her and asserts his admiration, calling her an extraordinary woman, ‘No’, she responds, ‘I’m not extraordinary, I’m just …a Mom…” (eliciting an audible groan from the audience). Nevertheless, Gabrielle Union always remains watchable - playing vulnerable and threatening by turns.

A veteran action director, McTeigue shoots individual fight scenes well enough, but never provides much modulation or escalating tension. Shaun breaks in and out of her property with relative ease, hatches plans whose parameters never become apparent, and always manages to be exactly where she needs to be. McTeigue’s other work (V for Vendetta, Sense8) tends to contain an element of social commentary, and in Breaking In we see a strong woman of colour, outwitting a group of criminals intent on violence to her children and herself.

The character Shaun certainly demonstrates the cliché of the ‘lioness-mom’ protecting her cubs at all costs, but the fact that the family has the advantage of the fabulous wealth, and that the husband and son are rendered so utterly ineffectual, does appear to be going overboard in putting across that message.

Nevertheless, Breaking In is an entertaining, untaxing thriller, whose 88-minute run-time never drags long enough for us to examine the story’s implausibility too closely. The film remains fast-paced and suspenseful, making it easy to overlook the storytelling inconsistencies and to focus instead on the emotional aspect of a mother who will stop at nothing to save her children.