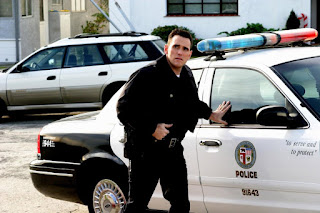 This time 3 years ago, Susan Omand only watched the 2005 film Crash because it was raining on the Bank holiday weekend. Well, guess what? Here's a reminder ...

What do you do when you're stuck on 'holiday' (I use the term loosely) in a cottage with no internet, a very flakey mobile signal and bucketing rain outside? You rake through the DVD collection amassed there by previous incumbents, obviously having been stuck in a similar situation. That's how I came to watch Crash recently.

I'd heard about the film of course, given that it won many awards including 3 Oscars and I must admit that that, the general synopsis and Sandra Bullock as the big name on the DVD cover cast list (not a big fan, sorry Ren), meant it wouldn't have been a film I would have chosen to watch in other circumstances.

The main premise of the film is that, over the course of 2 days, the lives of various people in LA overlap as they come into contact, so you have to be in the right humour for a slow burn rather than an action packed film. There is no single overarching linear plot, instead it is a series of interlinking incidents and events that bring some people together at certain times. Think of Pulp Fiction but more polished and without all the violence and you have the idea of the vignette style. I was hooked from the start.

It is the characters themselves, their traits and interaction, that builds the real depth into the film. To be honest Sandra Bullock's character, as the snobbish wife of the Brendan Fraser's DA, is probably one of the least interesting as she doesn't really develop over the film. My favourite character, with the comedic pathos of the young carjackers running a close second, is Matt Dillon's cop - starting out as a complete racist asshole but with so many hidden depths and a wonderful poignancy in some of his actions.

In fact, race and racism is a central theme throughout the whole film, and the crux of a lot of the non-familial interaction, as it is used as a publicity stunt by the DA, as an excuse by the gunshop owner and as a means of wielding power by just about everyone. Other than that, there are a lot of relationship links explored within the stories - mother/son, father/daughter, marriage, work partnerships and more. The whole gamut of interpersonal emotion is there and there's one particular stand out relationship that I didn't pick up on til near the end. Very subtly done but brilliant. The dialogue, although sparse, is very well written with no words being wasted and some wonderfully funny lines as well as highly emotive moments tying everything and everyone together. This sparseness lets not just the acting shine through but also highlights the pivotal role of both the evocative music and the stunning cinematography to make this a beautiful film.

Don't ask me what happened in the stories, I couldn't really tell you. What I can tell you though is that I was thoroughly captivated by the richness of their telling.