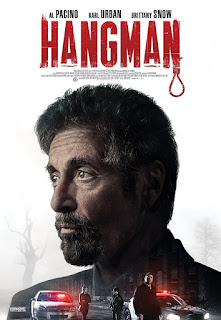 Susan Omand fills in the blanks and watches Hangman...

Decorated homicide detective Ray Archer (Al Pacino) partners with criminal profiler Will Ruiney (Karl Urban) to catch one of the city's notoriously vicious serial killers, who is playing a twisted version of murder inspired by the children's game Hangman. Every 24 hours, a body is hung revealing the next letter carved into the victim's body. As crime journalist Christi Davies (Brittany Snow) reports on the crime spree, the trio must race against the clock to prevent further murders. Archer and Ruiney become more entangled in the ruthless game than they could ever have imagined, but they must keep playing to save lives and attempt to catch the Hangman.

This should have been the feature-length pilot to a TV detective series. It has all the hallmarks, with a strong cast and an interesting premise for a serial killer, but it also had all the flaws of a TV pilot, with very uneven pacing in the action, a lot of unnecessary character backstory building and too many handy coincidences in the plotline.

So let’s start with the good stuff. I like Karl Urban in films – there I said it. I absolutely loved Dredd, he was excellent in Chronicles of Riddick and his turn as McCoy in the new Star Trek films is very close to the original because that’s the kind of actor Urban is; he plays someone else playing a role so you always know what you’re going to get with him. That may feel a bit like it’s damning with faint praise but, as long as you accept that there will never be much depth to his work, then he’s good at what he does and he’s perfect for the role he has in this film, as the “slightly up the pay grade” detective with a lot of personal baggage. Partnering him with Pacino as a retired cop who comes back for this one case kinda works for this film too as the characters have a shared history which affects them being totally comfortable in each others’ presence, so it’s okay that they are slightly awkward together. You can tell Pacino is not the same actor that he was 30 or 40 years ago but that suits the character he portrays here, with the world weariness and slightly patronising edge to his explanations. The other piece of casting that really worked for me was Sarah Shahi as the Captain and Urban’s boss. I spent quite a while trying to work out where I knew her from though before coming up with the fact that she was Shaw in Person of Interest and I think the character is quite similar in temperament, so it works.

As I said, though, there were a lot of things, maybe too many for some people, that didn’t work. The pacing was awful, with far too much time spent on the action scenes, chases and searching, trying to build up the suspense in the film while not concentrating on the psychological aspect nearly enough for me. The premise of the “hangman” game is really clever and could have been better used but it became a forgotten plot device as the investigation turned more into a point to point “treasure hunt with clues.” Talking of those clues, I felt that these were clumsily handled in the dialogue with irrational leaps of logic needed in some places whilst other clues were over explained. The reporter was especially irritating at this, “just happening” to spot clues and making wild assumptions that turned into fact. However I’m used to watching all kinds of TV detective drama, from CSI upwards and downwards, so I could forgive the “lowest common denominator” form of plotting, at least it didn’t try to be cleverer than it actually was. Treating it like a TV show also helped with the obvious fact that, at some point, someone in the team was going to be targeted by the killer.

So, although it wasn’t anything like groundbreaking, it was an agreeable enough way to spend an afternoon. Yes, it could have (and maybe should have) been better than the equivalent of a TV movie but, as it was, I still found myself enjoying predicting the storyline ahead of time and, right up until the last 10 seconds of the film, I thought I had it all figured out. Turns out, I was wrong. And that ten seconds is why this should have been a TV series.