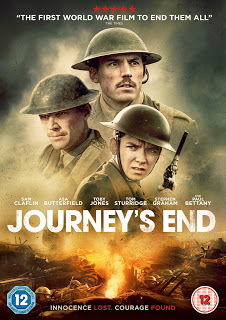 On Digital from Friday and DVD next week, Tony Cross reports back from the front at Journey’s End...

Journey’s End has been both a play and a novel. Written by R.C. Sherriff who fought in World War One himself.

It is part of the literary culture of World War One alongside the war poetry, the novels and memoirs like Rupert Grave’s ‘Goodbye To All That’, Siegfried Sassoon’s ‘Memoirs of George Shearston’, Richard Aldington’s ‘Death of a Hero’, Ernst Junger’s ‘Storm of Steel’, Edmund Blunden’s ‘Undertones of War’, Henri Barbusse’s ‘Under Fire’ and Erich Maria Remarque’s ‘All Quiet on the Western Front’ and others. These books, particularly in England, helped form our memory of World War One, which Paul Fussell does a superb job of analysing in ‘The Great War and Modern Memory’.

This culture focuses on the waste of lives, the callousness (and ineptness) of Generals and the horror of war. World War One, unlike World War Two, is seen to be a war – in Britain at least – that wasn’t worth fighting. The fact that the end of that First World War could be summed up by Marshall Foch’s quote, “This is not peace. It is an armistice for twenty years” only seems to hammer home the pointlessness of the conflict.

Journey’s End is a solid example of that kind of storytelling. The film then does a great job of taking the play, which is linguistically much of its time, and making a film out of it. This isn’t an adaptation in a half-arsed sense, this is taking something off the stage and turning it into something that is new but doesn’t lose the core of the original work. And although we step outside the dugout where all the action happens on the stage production that dugout is still the centre of everything.

It is where we see Stanhope’s slow collapse, Osborne’s attempts to help keep his friend together, Raleigh’s naivety, Trotter’s normality, Hibbert’s terror and Mason’s concerns. And this is all about fear. How men deal with it or don’t. How all men have a breaking point, even (possibly especially) the bravest of us. And at the centre of that fear, hardly talked about but always there, is death. These men know that they are going to die and none of them want to talk about it.

Hibbert (Tom Sturridge) is the man who is most obviously lost it. He tries to flee claiming to be sick, but Stanhope (Sam Claflin) stops him. The scene between them, when Stanhope reveals that he too is terrified, is incredibly strong. Indeed, the best thing about this film is the strong performances from the whole cast. These are people you care about and that you know are going to meet a terrible fate. Probably. There is no happy ending coming. It’s a story of courage. Courage I don’t know I could have had. How do men not all break? Perhaps the do. But perhaps some are better at hiding it than others. 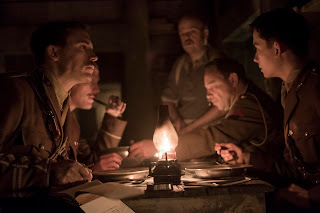 When it is announced that there is going to be a raid, in daylight, and Osborne (Paul Bettany) is to lead it we spend a chunk of time with Osborne’s preparations for death. The letter to his wife, the way he takes off those objects – a ring and watch – that matter to him and leave them behind in the dugout. But still he goes.

The word ‘Cheerio’ crops up a lot in this film and it starts to sound like the knell of doom: ‘What passing bells for those that die as cattle?” The word cheerio. Said over and over again but carrying the weight of so much unsaid with it.

And Raleigh (Asa Butterfield) who looks like a child dressed up as a soldier and who has pulled strings to be attached to his schoolfriend Stanhope’s command is a walking witness to what has become of Stanhope. And to Stanhope he is a horrible reminder of the man he used to be and Stanhope seems to hate him for it.

This is the fourth film I have seen Sam Claflin in recently and he’s been superb in them all. He’s exceptional in this, as is Paul Bettany who seems to have not had the career his abilities deserve. But as I said earlier the acting all around is superb. When you’ve got Toby Jones in a relatively small part doing his brilliant thing then you know things are going to be good.

It drives me a little mad that it got a UK cinema distribution for about three days. However, it is what it is. Now you have a chance to make up for it and watch the DVD.

This is a fantastic film of a fine play. I found it moving and thoughtful. Go watch it.