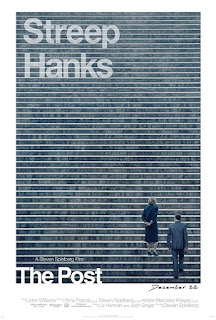 With the film now out on DVD, Steve Taylor-Bryant delivers his thoughts on The Post...

I love history, more specifically what I call modern American history, or post Second World War. That whole era of the 1950’s and 1960’s and the real depths of the Cold War have always fascinated me. In amongst my studies of the things that initially interested me, fell world events like the Kennedy Assassination and Vietnam, and then the Watergate scandal and the downfall of Richard Nixon. I had read lots of books on the subject at school and then in my free time, and then I watched a film called All the President’s Men and the whole Watergate and Pentagon Papers period sparked something inside of me and I became obsessed.

In all my years of watching film and television I never thought anything would come close to the realism and fascination that I experienced watching the All the President’s Men, until now. Covering the Daniel Ellsberg story was always going to be tricky; AtPM took the Deepthroat angle about the President’s illegalities rather than Ellsberg’s moral argument, and The Post, whilst it shows more of Ellsberg’s actions than I thought it would, takes a more workplace politics angle. Again, the argument about the ethical nature of whistleblowing is side-tracked slightly as a different element of publishing a leak is pushed forward, in this case freedom of the press.

I love both AtPM and, as you’ll see, The Post but I can’t help but wish that a serious filmmaker or studio would have the balls to nail their colours to the mast and do a ‘right or wrong’ film about the actions of Ellsberg. I appreciated Oliver Stone’s look at Edward Snowden, but I would much prefer a Hollywood take on the most infamous leak, the Pentagon Papers, and the fallout politically from what followed. I, myself, fall to the side of Ellsberg but I am more than willing to investigate arguments from other standpoints and, honestly, a film that could do that would be incredible. For now, though we have at least films that are brave enough to stand up for investigative journalism and bravery in the face of threats from a powerful government by the publishers that stood up for press freedom, especially today when both good journalism and press integrity is very hard to come by.

To the film then, The Post, and the side of Spielberg that I like the most; his non-science fiction historical films. There were a few surprises for me going in to the film; Meryl Streep and Tom Hanks had never worked together before and Meryl Streep had never made a film with Steven Spielberg. Both these facts were shocking to me as I was sure that I’d seen this team up many times before. I suppose that’s the power of this collaboration, they are everything you like about Hollywood and so you see them everywhere. As Ben Bradlee, Hanks was as perfect as you would have expected, playing passion and stubbornness in a way that instantly makes you root for him, and the ancillary cast members were all perfect as well, a tip of the cap to Bradley Whitford who has yet again proved my theory that he has never been bad in anything, but it’s Streep that takes your attention, correction – its Streep that demands your attention.

As publisher of the Washington Post, Kay Graham, Streep is mesmerising. From the little lady in the room that all the powerful men ignore to the most powerful figure in publishing, the transition is expertly played out. Streep plays Graham early in the film as someone who is almost accidently there, publisher by default of her husband’s suicide rather than ambition, and someone who fits in with the gossipy wives a lot easier than she does in business. This is incredibly powerfully portrayed in the boardroom of her own company where nobody listens to her and she is effectively ignored. Throughout the movie the cinematography helps to bear out this treatment of women in that (and probably still this) era with Streep’s face hardly lit compared to her male counterparts, darkened as if she is to remain in the shadows, and she is not lit well until her steadfast decision to publish extracts of the Pentagon Papers, when she becomes the powerful figure that I knew Kay Graham to be from my studies. When you go to that much detail to elaborate a point and mix that filmmaking skill with an actress that could easily win an Oscar opening a pint of milk, you are in for a real treat as a film fan.

Whilst The Post doesn’t quite offer the detail that I personally would want from a project about the world’s most important leak, it covers enough to be enjoyable and more than enough for a viewer without my passionate obsession to both learn and be entertained. What The Post does well is take you to that time. In its look, its lighting, or aforementioned lack of, in its period detail, in its cast and their mannerisms, it is essentially a documentary feel to a glossy studio film, very cleverly done and certainly welcomed by me as a viewer who doesn’t think that filmmakers pay enough attention to the small things anymore. As both an honorary prequel and companion piece to AtPM, as a story well told, as a lesson in how films should be made, The Post hits every mark. It is a film that in 30 or 40 years will be remembered as we all remember AtPM now. It is one of those films that I envision will become essential study for film students in the future, and to any young filmmaker that wants to make a period historical they could do a lot worse than to look at what Spielberg and his Director of Photographer, Janusz Kaminski, have accomplished. As young film writers aspiring to have their words put on the screen a lot can be learnt from screenwriters Liz Hannah and Josh Singer have managed with The Post. It is eloquent writing for a newsroom that was probably a lot more, shall we say, “earthy” in its language and the narrative flows well considering the timeline stretches over a few more years than a usual film. The characterisations of Bradlee and Graham are brilliant and really give two stars a lot to work with.

Basically, watch The Post as, for everyone except me, it will be a perfect film. I still want a film that takes sides in the Ellsberg actions and stars Mark Ruffalo as Ellsberg...