"It's a funny old game..." The results of this year's DreamCage Challenge Cup are now in. Susan Omand looks back over the stats for her season...

... dary. It was Legendary.  OK, maybe it wasn't quite the stuff of legend since I only managed 6th in our league for this year's Fantasy Football. Which is not bad until you realise that my league nemesis Steve managed to get 4th and I'll never hear the end of that.

As always I started the season with Harry Kane on my team knowing that he wouldn't score until at least September and... yes, right on cue, he didn't start hitting the net until game week 4. I also wasted my Triple Captain in November (just for a laugh) on Lukaku, who seemed to be a scoring cert for Man U at that point, and caused what was pretty much his lowest scoring match that he played in and then managed to screw up my Bench Boost with a pile of zeroes in week 28. My weekly scored fluctuated between 26 and 109 but my season was saved though (as, however, was it for many others) by Salah having a superb season, only missing 2 league games and scoring 32 goals to net (pun unintended) 303 points in the Fantasy League to be top points scorer, almost 70 ahead of the next player (Sterling with 229, in case you are interested. Kane was 3rd with 217).

Talking of points, yes, the Omand Originals were 6th this year, over 200 points behind Wombert United, the eventual winners, although it was a game of to and fro for the top spot for a long while earlier in the year as league stalwarts Riyal Despoiltivo played a strong game, with last year's winner coming in a creditable 3rd and newcomer What's the Mata sneaking into 5th.

Here's how the rest of the table stacked up for us. 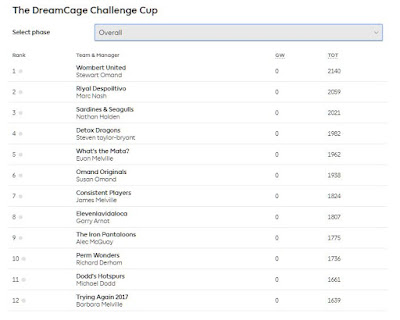 So it really is all over for another Premiere League season but fear not, our challenge will be back again in August if you think you can do better - the next DreamCage Cup... er... mug will be waiting to be claimed.

In the meantime, remember the World Cup starts in 31 days time. Have you completed your Panini Sticker album yet?

The DreamCage Challenge Cup is played on the official https://fantasy.premierleague.com/ website.