The Defective Inspector gets his five-a-day by playing Juicy Realm from SpaceCan...

I play a lot of serious games, far too many in fact, so when invited to play Juicy Realm I couldn’t help but get a little bit excited. I mean when you spend hours of game time shooting things, buying guns, dodging enemies and… Wait… I am doing all these things here? But I am attacking fruit?! Well take that Jamie Oliver!

Juicy Realm is a top down 2D shooter, it sits in the same genre as bit Dungeon or Binding of Isaac, where the primary goal appears to be killing anthropomorphised fruit… With guns. Just writing this now I feel silly but that’s really what the game is going for. As you trundle across grass, sand, snow and stone you must commit excessive vege-cide, unless it’s a tomato of course… that is a fruit. It also has the added choice of co-op, which is nice, but I do bring the warning here that the game has been tagged by users as casual. So if you are trying to find a red-bull induced party game akin to Nuclear Throne then move along, it’s not for you. 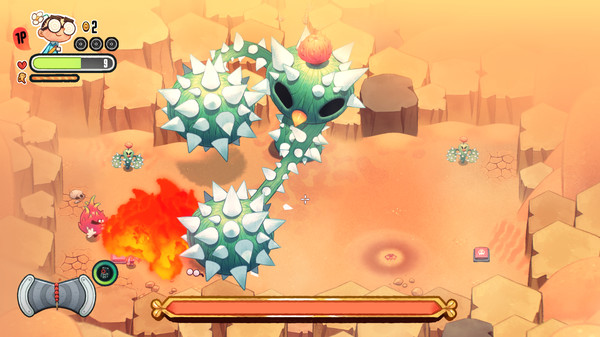 Juicy Realm is a forgiving roguelike title where you get to pick one of four characters. Each with a particular starting weapon and grenade like utility item it was clear at the start that variability was a key factor from the get go. The variety continues when you get to unlock new, and frankly insane, weapons after defeating a Melon-Dog, a Flail-Cactus, A Birthday Cake and what I can only assume is the crab from Moana. I re-iterate, this game is insane. The insanity is a welcomed divergence from the excessive seriousness found in the world today, so I am happy to sit in my straight jacket for an hour or two.

While bouncing off the walls I noted a few things worthy of amusement. First of all nearly every weapon is ridiculous simple examples like the “Steam” gun fires money or the stale French baguette tough enough to crack open a cantaloupe. Even the enemies had my scratching my head in bemusement, endless streams of absurd fruits and vegetables all seemingly taking over the world like Cloudy With a Chance of Meatballs 2 had come to gaming life. In fact thinking about it the comedy is pretty similar… 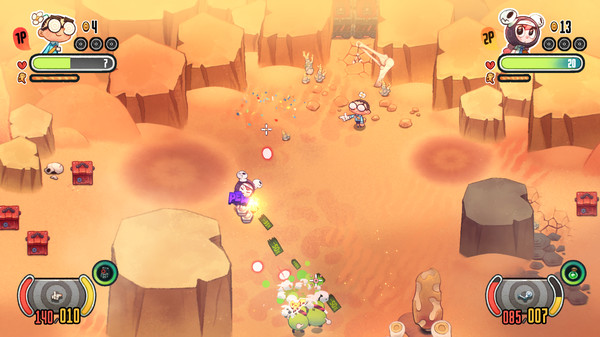 The biggest flaw of the game is only a casual gamer can really enjoy it. While graphically the game is zany, playful and particularly detailed there isn’t much to draw your attention for too long. I suppose when you are creating something designed to be casual there is an expectation that people will play it and death maybe more frequent than what I experienced. Between the relatively low game time and fixed bosses throughout the title it doesn’t encourage you to replay the game much more than a couple of times.

This article is short because the game is short, but it’s none the less entertaining. If you want to play around with a solo rogue-like or test your friendship with other plays then Juicy Realm will keep your entertained, amused and distracted albeit for a short period of time.