The War Report - Eleven Days in August: The Liberation of Paris in 1944 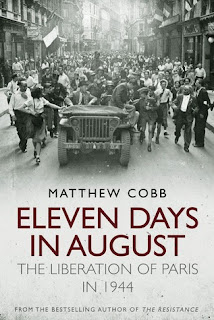 Today's copy of The War Report sees Tony Cross read Eleven Days in August: The Liberation of Paris in 1944 by Matthew Cobb...

'I had thought that for me there could never again be any elation in war. But I had reckoned without the liberation of Paris - I had reckoned without remembering that I might be a part of that richly historic day. We were in Paris on the first day - one of the great days of all time.' (Ernie Pyle, US war correspondent) The liberation of Paris was a momentous point in twentieth-century history, yet it is now largely forgotten outside France. Eleven Days in August is a pulsating hour-by-hour reconstruction of these tumultuous events that shaped the final phase of the war and the future of France, told with the pace of a thriller. While examining the conflicting national and international interests that played out in the bloody street fighting, it tells of how, in eleven dramatic days, people lived, fought and died in the most beautiful city in the world.

Above all, it shows that while the liberation of Paris may be attributed to the audacity of the Resistance, the weakness of the Germans and the strength of the Allies, the key to it all was the Parisians who by turn built street barricades and sunbathed on the banks of the Seine, who fought the Germans and simply tried to survive until the Germans finally surrendered, in a billiard room at the Prefecture of Police. One of the most iconic moments in the history of the twentieth century had ended, and the face of Paris would never be the same again.

Eleven Days in August is a day-to-day account of the Liberation of Paris in 1944. So much, so the title.

It's a well-researched book drawing not just on the secondary source material but on the words of those who were there. It pulls you into the events of those eleven days. There's a political story here as the Free French/Gaullists vie with the Resistance and the Communist Party for control of events. It's also a good example of how events can escape the control of even the most controlling politicians. It covers the military side of things and the personal. Names are given to those who fought, those who collaborated and those who died. It's also good on how the events of the Liberation were used afterwards to build a picture of France liberated by the French. And how the uprising forced the Allies to liberate Paris when their original intent had been to go around it.

It covers the German side of things too, showing how they lost control of Paris and how they were limited in what they could achieve by both a lack of manpower and equipment but - perhaps most importantly - a lack of will.

Cobb draws all these threads together in a tense, well-written narrative history, which I heartily recommend. It makes me think my next read should be Anne Sebba's 'Les Parisiennes', which I've had sitting on my desk for some time.