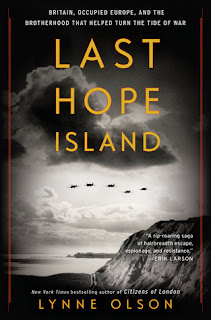 This week on The War Report, Tony Cross continues his series of articles on films and books portraying Britain in the Second World War with Last Hope Island: Britain, Occupied Europe, and the Brotherhood That Helped Turn the Tide of War by Lynne Olson...

An engrossing account of how Britain became the base of operations for the exiled leaders of Europe in their desperate struggle to reclaim their continent from Hitler.

When the Nazi blitzkrieg rolled over continental Europe in the early days of World War II, the city of London became a refuge for the governments and armed forces of six occupied nations — Belgium, Holland, Luxembourg, Norway, Czechoslovakia, and Poland — who escaped there to continue the fight. So, too, did General Charles de Gaulle, the self- appointed representative of free France. As the only European democracy still holding out against Hitler, Britain became known to occupied countries as ‘Last Hope Island’.

In this epic, character-driven narrative, acclaimed historian and New York Times–bestselling author Lynne Olson takes us back to those perilous days when the British and their European guests joined forces to combat the mightiest military force in history and restore order to a broken continent.

This is a fine book. It's well-researched, well-written and - unintentionally I suspect - has made me radically anti-Brexit (but that is a story for another day.)

It tells the story of Britain and its European allies (although Yugoslavia gets skipped for reasons Olson explains at the end) before, during and after World War Two. It's a tale of success and failure. There are heroes and there are villains. It shows how Poland, ostensibly the reason we went to war, was utterly failed by the Allies (although I'm not quite sure what they could have done to stop Stalin getting what he wanted. Unless they went to war with Russia in 1945.) And Poland's story is the darkest of them all. There's also the Czechs, the Belgians, the Dutch, the Free French and the Norwegians.

The book does a fine job of showing the gap in the British experience of World War Two and the continents, which had a major impact on how we interacted with Europe afterwards. It's good on Churchill's romantic streak being unable to stand up to the reality of being the 'little donkey' between the US and the USSR. It's a little scathing about Montgomery's faffing over Antwerp and the impact of the failure of Operation Market Garden on the Dutch.

The women of Britain come out of it well. As do the women of occupied Europe. I was particularly moved by a story at the end about Andrée de Jongh, who had helped run an escape line for Allied escapers and evaders, which I won't spoil.

The BBC comes out of it well too, which is good to be reminded of at a time when it is under the cosh from the left and the right in Britain for its political coverage. It was the voice of hope to a lot of Occupied Europe.

MI6 and the SOE come out of it less well, although things do improve as the war goes on but the catastrophic failure of SOE in the Netherlands is well-told.

But I'm waffling on. You should read this because it is good. Because it is a reminder of a time when Britain did the right thing - not always for unselfish reason - and it is a reminder that Britain is European. Our island status does not separate us from Europe however much we may want it to. Our history is tied up with the continental part of Europe and to pretend otherwise is to be a fool.