The War Report - Their Darkest Hour 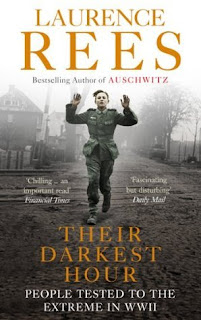 This week on The War Report, Tony Cross continues his series of articles on films and books portraying Britain in the Second World War with Their Darkest Hour: People Tested to the Extreme in WWII by Laurence Rees, a collection of memories from the people actually involved...

How could Nazi killers shoot Jewish women and children at close range? Why did Japanese soldiers rape and murder on such a horrendous scale? How was it possible to endure the torment of a Nazi concentration camp?

Award-winning documentary maker and historian Laurence Rees has spent nearly 20 years wrestling with these questions in the course of filming hundreds of interviews with people tested to the extreme during World War II. He has come face-to-face with rapists, mass murderers, even cannibals, but he has also met courageous individuals who are an inspiration to us all.

In Their Darkest Hour he presents 35 of his most electrifying encounters.

This is an interesting book. A collection of short accounts of people's experiences of World War Two, which shows how people's behaviours were tested and the decisions they made. These are not just the usual accounts of German atrocities.

There are stories here about those who didn't necessarily contribute to what was done but who were part of it and never questioned it, such as the actress Kristina Söderbaum. We hear from Soviet men and women, including the terrifying Zanaida Pytkina who was a member of SMERSH*. We hear from the Americans and British. Occasionally we hear a story about genuine courage when someone stands up against the prevailing horror, but mostly these are stories about a failure to do that.

Rees raises two key questions: what would we have done (and how can we truly know) and what can we do to stop these things happening again, which in the current political climate is an interesting question. The accounts of the British treatment of Cossack and Yugoslavian POWs that we handed back to the Russians and Tito shows that sometimes we don't have the moral high-ground, although Rees rightly points out that whilst there is criticism to be made of the Allied bombing campaigns over Germany and Japan they stopped once the war came to an end. There was no question that Nazi and Japanese atrocities wouldn't have carried on had they won the war.

He also notes how the de-humanising of the enemy makes it much easier to kill them. The Japanese didn't see the Chinese as 'human' and the Germans were taught the same about the Jews. If you see someone as cattle it is easier to justify their murder. (And actually, one of the saddest things about this book is how few people had any lasting guilt - apparently - about what they had done or - in the case of the Germans/Japanese - how much they pretended not to know.)

I found the Japanese and Soviet stories most interesting, possibly because I've read less about those sides of things than the Germans and one wearies of elderly Germans talking about how charming the Nazis were, how things were better then and how they couldn't possibly have known what was happening to the Jews.

However, it is worth a read because Rees key point is that if you want to stop these kinds of thing from happening you need to stand-up and be counted as early as possible: "The best protection lies in trying to ensure that the situational ethic of society as a whole conforms to the rule of law and the basic principles of humanity - values that after World War II were enshrined in the Universal Declaration of Human Rights and the European Convention on Human Rights**. Just pretending that bad things are not happening and only thinking of oneself is rarely a sustainable option. Ignoring the 'little' abuses when they begin only makes it harder to stop the bigger abuses that follow."

And that - in our new world - is an important lesson to learn. It's why you stand up for the rights of the people who hate and despise everything we stand for or whose behaviour we find repugnant. Once rights are taken away from them, which is an easy sell, it becomes easier for a government to take the rights from the next group and the next group. Until you find yourself in a Holocaust via a thousand little steps. It's what Niemöller's famous poem is trying to say.

It's a tough read at some points. It's an ugly insight into how thin the veneer of civilisation might be, but it illustrates the need to stand up and be counted as early as possible whilst pointing out that until we are truly tested we can never know how we would behave.

*Yep, a real organisation and not just something invented by Ian Fleming for James Bond.

**Those dastardly rights the Conservative Party wants us to repudiate and replace with some theoretical 'British Bill of Rights'.