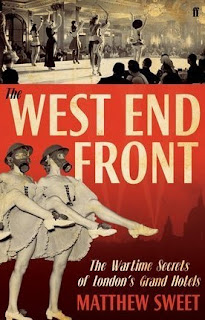 This week on The War Report, Tony Cross continues his series of articles on films and books portraying Britain in the Second World War with a trip to The West End Front: The Wartime Secrets of London's Grand Hotels by Matthew Sweet ...

The Ritz, the Savoy, the Dorchester and Claridge's - during the Second World War they teemed with spies, con-artists, deposed royals and the exiled governments of Europe. And now, Matthew Sweet's West End Front is just as teeming with the incredible cast of characters from this unique period of London's history.

Meet the girl from MI5 who had the gravy browning licked from her legs by Dylan Thomas; the barman who was appointed the keeper of Winston Churchill's private bottle of whisky; the East End Communist who marched with his comrades into the air-raid shelter of the Savoy; the throneless prince born in a suite at Claridge's declared Yugoslav territory for one night only. Matthew Sweet has interviewed them all for this account of the extraordinary events that unfolded under the reinforced ceilings of London's grand hotels.

Using the memories of first-hand witnesses, the contents of newly declassified government files and a wealth of previously unpublished letters, memoirs and photographs, he has reconstructed a lost world of scandal, intrigue and fortitude.

This is the third Matthew Sweet book I have read and is as interesting and well-written as the previous two. Like those, it teases out the forgotten - or mythical - history of a period or place, in this case the luxury hotels of London's West End.

There are stories of the straight and the gay, men and women, heroes and traitors and Kings and Communists. Class matters in this book. Each chapter deals with a subject and is well-researched, including interviews with people who were involved in the events he is describing.

He's good at reminding us in some chapters about the darker aspects of what happened in the hotels, such as murders and illegal abortions. The chapter that is mainly about Stella Lonsdale is particularly good at trying to find out what was really going on behind her story and reminding us of the cost of her - possible - betrayal.

Also, it is always good to find a book about World War Two that doesn't skirt the fact that there was a lot of sex going on. I laughed at this quote, "They were rehearsing in a hotel ballroom when Churchill declared Victory in Europe. It was a raucous, joyous, unforgettable evening: the ships' sirens brayed and hooted all night in Southampton Water. Joyce woke up on the first morning of the peace and watched the gardener picking discarded condoms from the rose bushes." You don't get scenes like that in most films and television about World War Two, do you?

Great fun to read and packed full of stories waiting to be expanded on.