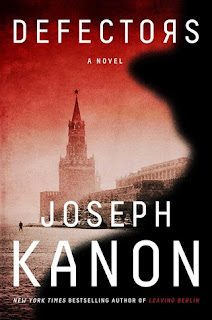 Steve Taylor-Bryant re-enters The Cold War as he reads Defectors by Joseph Kanon...

Moscow, 1961. Stalin has been dead for eight years. With the launch of Sputnik, the Soviet Union’s international prestige is at an all-time high. Former CIA agent Frank Weeks, the most notorious of the defectors to the Soviet Union, is about to publish his memoirs, and what he reveals will send shockwaves through the West.

Weeks’s defection in the early 50s shook Washington to its core—he had been a beloved member of the OSS and then the CIA, one of the bright young men who’d come out of the war ready to take an early lead in the new American century. His betrayal rippled throughout the State Department, prompting frantic searches for moles and forcing the resignation of Simon, Frank’s former college roommate and best friend.

Now, a Soviet agency approaches Simon, a publisher in New York City, with a controversial proposition to publish the memoirs of his old friend, Frank Weeks. Simon knows that there’s no way the US government will approve the publication of a book clearly intended as propaganda for the KGB…yet he finds the offer irresistible.

I can’t resist a Cold War novel and to find one from the author The Good German, Joseph Kanon, made this book an irresistible purchase. The plot was excellent, reminiscent of the real-life defector Kim Philby releasing his own memoir, the depiction of 1960’s Russia was not as dark and sombre as some novels would have it described, and the inclusion of ‘real life’ spies in the likes of Guy Burgess and Donald McLean added an authenticity to the narrative that made the entire reading experience seem real in a way that a lot of spy novels don’t accomplish. The relationship between the brothers is a fascinating one, with the younger Weeks constantly wondering how much his brother had used him in his spy work for the Russians, and it’s fascinating to see the ebb and flow between brotherly love and distrust as it weaves its way through the book. At times I thought I had guessed what was going to happen come the end, but I was wrong every time as Kanon threw twist after twist at me.

Joseph Kanon made me a fan with The Good German a while ago, a book that I couldn’t put down and led to me losing an entire day as I consumed it in one sitting and, whilst I read Defectors over a couple of evenings, I think that is more down to my ageing eyes than Kanon’s ability to grip me with a story as Defectors is one of favourite reads of recent times. Realistic, well researched, gripping, all good words to explain what you’ll get with Defectors and yet none of them seem to do it justice.