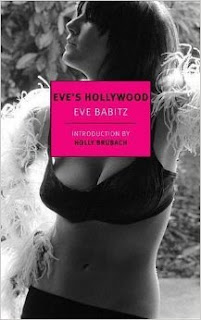 Tony Cross headed to the Hollywood of the 1950's and 60's as he read Eve's Hollywood by Eve Babitz. And then swears. You have been warned...

Journalist, party girl, bookworm, muse, artist: by the time she'd hit thirty, Eve Babitz had been all of these things. Immortalized as the nude beauty facing Duchamp over a chessboard and as one of Ed Ruscha's Five 1965 Girlfriends, it turns out that Babitz was a writer with stories of her own. In Eve's Hollywood she gives us indelible snapshots of southern California's haute bohemians, of surpassingly lovely high school ingenues ("people with brains went to New York and people with faces came West") and enviably tattooed Chicanas, of burnt-out rock stars in the Chateau Marmont. In her deceptively conversational prose, we are brought along on a ride through an LA of perpetual delight: to a joint serving the perfect taquito, to the corner of La Brea and Sunset where we make eye contact with a rollerskating hooker, through the Watts Towers, and shopping at Central Market. This "daughter of the wasteland" is here to show us that her city is no wasteland at all, but a glowing landscape, swaying with fruit trees and bougainvillea, buffeted by earthquakes and Santa Ana winds. By the end, there is little doubt that Babitz herself is proof there's more to Hollywood than meets the eye...

This book is sort of autobiography, but it reads like a combination of Bridget Jones Diary, something by Hunter S. Thompson and Dashiell Hammett. It's about growing up in L.A. in the 50s/60s.

It's one of the best books I've ever read.

There I said it.

It drifts along nicely and then smacks you around the head with something so brilliant, beautiful or funny that you want to underline it or save it so you can pretend you said it.

Babitz is, to quote the blurb on the back of the book, 'Journalist, party girl, bookworm, artist, muse...' There's a picture out there of her, naked, playing Duchamp at chess. It's a woman with a hinterland.

I'll finish with some quotes: [Contains the aforementioned  swear words]

"With me, she came dramatically into focus on the third day because I saw her smile and her smile from that Garbo sadness broke the heavens open in choral arpeggios & the guy sitting next to me just sat there after she'd gone past. Just sat there."

"But my education has been through reading, which has been my salvation and backbone throughout life. The time I wanted to kill myself in New York, Domby and Son saved me. Charles Dickens is perfect for accidental hit-bottom. Anthony Trollope is too, but he's so divine it's a shame to waste him just because you're in trouble."

"John Wilcock (one of the founders of EVO) talked about me so much that some girl who got around started calling me "Wondercunt" before I'd even shown up..."

Read it. It's fucking marvellous.