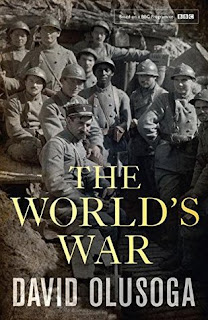 The World's War: Forgotten Soldiers of Empire by David Olusoga is a World War I book with a difference, as Tony Cross finds out...

A unique account of the millions of colonial troops who fought in the First World War, and why they were later air-brushed out of history.

Every major battle fought on the Western Front, from the First Battle of Ypres to the Second Battle of the Marne, was fought by Allied armies that were multi-racial and multi-ethnic. Yet from the moment the guns fell silent the role of non-white soldiers in the 'Great War for Civilization' was forgotten and airbrushed out by later historians.

THE WORLD'S WAR quotes extensively from soldiers' diaries and other eye-witness sources, bringing to life the searing experiences of the hundreds of thousands of non-white troops whose bravery contributed to the final Allied victory.

This is a fantastic book. It's well-written, well-researched and should be essential reading for every school child in Britain.

It's a history of forgetting as much as it is a history of colonialism. It tells the stories of what happened to the colonial troops of Britain and France as well as the African-American soldiers of the United States of America. It talks about the thinking behind their dispatch to the front line and why it was objected to. It tells the stories of their involvement in the fighting and their treatment upon their return.

In a way perhaps the biggest insult is how we have gradually erased these people from our collective memories of World War One. Or how when we do remember them at all it isn't a cross’s row on row but in mass graves or statues not as individuals.

I knew some of the stories of the British side of things, but the French material was mostly unknown to me. As was how the Germans using the presence of colonial troops in the Allied Armies to suggest that they were coming to dilute and despoil the white race. The fear of black men mixing with white women is very much to the fore. As is the fear of what would happen in the colonies once you'd taught colonial men to fight against white men. Colonial troops had been used before, but they were mainly used to fight other non-white peoples. Now we were going to train them to fight and kill other white men. This fear stood square behind the way African-American troops were treated by the United States too.

Indeed the American section is perhaps the most shocking. Partly because one forgets the epidemic of lynching that was going on in the US before they got involved in the war, partly the way they were treated once they went to war and the disgusting way they were treated upon their return from the fighting. How their courage was erased from the story to suit a white narrative. This section should be read by every American, especially now. (Although I fear some might approve of it in the current climate.)

The book is also good on some of the myths created by the Allies about the peoples who served under them: that there were Indian races more 'martial' than others being the most repeated.

Oh, perhaps the other most important part of the book is the experience of the Chinese Labourers whose role in World War One has been almost entirely erased from Western memory.