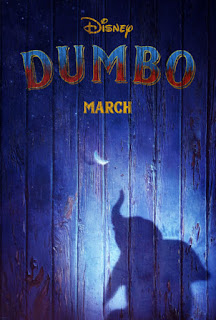 From Disney and visionary director Tim Burton, the all-new grand live-action adventure “Dumbo” expands on the beloved classic story where differences are celebrated, family is cherished and dreams take flight.

Dumbo soars to new heights alongside a charming and spectacular aerial artist, Colette Marchant (Eva Green), until Holt learns that beneath its shiny veneer, Dreamland is full of dark secrets.

And, in case you are wondering, the trailer features a new recording of the song “Baby Mine” from the original Disney animation, here performed by Norwegian singer-songwriter Aurora. We're not crying, YOU'RE crying...