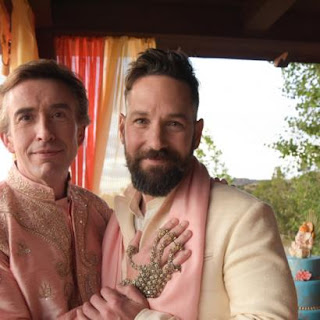 Steve Coogan and Paul Rudd star as Erasmus and Paul, long-term lovers who live a carefree and rather wild life in Santé Fe, where Erasmus is a kitsch celebrity TV chef and Paul his long-suffering producer. When a grandson Erasmus never knew he had arrives at their home clutching a plastic bag containing cash, cocaine and a Bible, they find their lifestyle thrown into disarray.

I’ll be honest from the outset and tell you that I am not Steve Coogan’s biggest fan. I know he is a talented individual, but all I see is Alan Partridge whenever he is on my screen in anything. I gave Ideal Home a go because I thought the comedic situation deserved a chance. I am so glad I did, and I apologise to Mr. Coogan for what appears to be an error in my judgement, because if you can steal the screen from a wonderful child actor, Jack Gore as Bill, and the ever-impressive Paul Rudd then you deserve all the awards and plaudits. Coogan was magnificent; Erasmus is an annoying character, pretentious and way beyond camp and, in the hands of a lesser actor, could have played more like a parody and bordered on offending people. Instead, Coogan nailed every facade of Erasmus perfectly - the faux celebrity, the false intelligence, the showing off, the supposed lack of empathy, all characteristics that are hard to pull off but to then allow the audience to see how false Erasmus is and change towards the end when his world, the things he wants in his life, is disappearing? Well, that takes true talent and Coogan is the stand out performer in a wonderful little trio of main stars.

Gore is not an actor I was familiar with but, after Ideal Home, is sure to have a bright future. He took on the downright depressing aspects of Bill’s life with aplomb but most impressively stood toe to toe with two seasoned professionals when it came to comedic timing. Paul Rudd constantly impresses me, in Mute from Duncan Jones he stole the show alongside Justin Theroux, and in Ideal Home he shows that every part of an actor’s range is achievable in the one film. His comedy was perfect, his love of Bill heart-warming, his exasperation with Erasmus wonderfully portrayed, his facial expressions often doing more powerful performing than his dialogue.

What writer/director Andrew Fleming (The Craft) has created with Ideal Home is a beautiful, if not sometimes tragic, family situation that tears at the heartstrings as much as it exercises the laugh muscles. Come the end I was genuinely overwhelmed and emotionally exhausted with a rib ache I haven’t got from a film for a very long time. Everyone involved in Ideal Home deserves a hearty thanks and congratulations for a job very well done, and yes… “you can’t say cockhound on basic cable.”