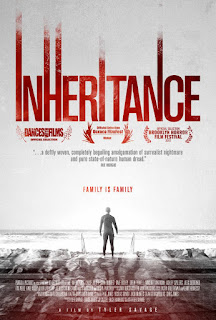 A dark legacy is uncovered in Inheritance, watched by Ren Zelen...

Inheritance is the first feature from Tyler Savage, and is a psychological thriller concerning one man’s struggle dealing with a destructive cycle begun by his forebears.

Ryan Bowman, (Chase Joliet, Krisha, It Comes At Night) is a quiet, young, working-class carpenter, who unexpectedly inherits an opulent 2.5 million dollar oceanfront house from his estranged biological father - a man he assumed had died years ago.

Ryan and his pregnant fiancée, Isi (Sara Montez), travel to the coast to look over the property. They are impressed by its lovely location and material comforts, and are surprised by the almost immediate arrival of a garrulous realtor (Dale Dickey), keen to sell the property for them.

The sale of such an imposing seafront residence will offer them the financial security needed to create a better future for themselves and their baby. However, mounting curiosity about his deceased father leads Ryan to become conflicted about selling the house. Even after he discovers a note left behind by his dad, ominously warning him to sell the house as soon as possible, he stubbornly decides to settle in and stay for a period of time.

Isi goes back home for a few days, leaving Ryan alone in the house. Returning from town after grocery shopping, Ryan finds an unknown man has let himself into the property and is digging up the lawn, apparently in search of something.

When Ryan confronts him the man shrugs off the strange circumstances of the meeting and introduces himself as Del Morse (Drew Powell) a distant cousin. Nevertheless, Ryan’s suspicions are aroused, and he insists the intruder leave the property and not return without consulting him first.

Ryan also notices that he is being watched by a neighbour who overlooks the house. Finding an excuse to visit he is invited inside by the neighbour who is named Bonnie (Krisna Fairchild). She then somewhat guardedly proceeds to tell him about the kind of man his father was reported to be.

The more Ryan finds out, the more he uncovers a dark family history. He begins to sleepwalk and have nightmarish visions of past events in the house. When Isi returns she finds him changed and suspects that Ryan may have begun to succumb to some kind of malevolent influence.

The violent past of the house and its prior inhabitants begins to haunt Ryan’s life. Soon his obsession begins to spiral out of control, affecting those closest to him. When Ryan’s sister Katherine (Kate Norby) visits the house with her husband Wallace (Paul Henri) the evening begins awkwardly and ends badly with wounding comments and nasty recriminations, hinting at a difficult childhood and a fractions relationship between the siblings.

Inheritance conveys a gloomy story which implies that the land was cursed long ago because of the cruelty of the events that occurred there, stemming right back to the brutal treatment of the indigenous Native Americans whose land it once was.

The film belies its indie budget with a stunning location and exceptional cinematography by Drew Daniels (Krisha, Found Footage 3D). Director Tyler Savage tries to create an atmosphere of eerie moodiness and thanks to the impressive work done by Daniels and the rest of the production and art crew, a brooding and dreamlike visual style supports the movie’s grim storyline. There are shots of shadowy, night-time beaches, large, dark windows and dusky gardens, contrasted with the sunny blue Californian skies and bright seascapes by day, enhanced by an atmospheric musical score and some good editing by Shane Hazen.

Scares are few and fairly mild, Inheritance prefers to examine how violent or criminal deeds continue to hover over a place and its history. Tyler Savage succeeds in creating an atmosphere of unease, and Chase Joliet as the film's central character is by turns, caring, anxious, brooding, and violently explosive.

Inheritance is not a horror film, but rather a ‘slow burn’ thriller. It takes its time in unfolding its story, perhaps rather too much time, considering that some aspects of it remain obscure. The film instead appears intent on examining how family history can awake personal demons and initiate psychosis - how the baggage that sometimes comes with our lineage can continue to have tragic and violent repercussions throughout the decades.


Inheritance will be available to rent or own on iTunes and Amazon Instant Video June 15th.
Review Copyright R.H. Zelen – ©RenZelen 2018 All rights reserved.