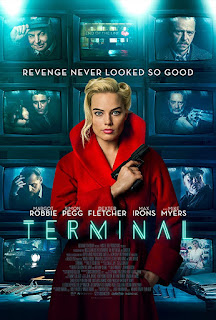 Having watched the film at Edinburgh Film Festival, Susan Omand gives her diagnosis of Terminal...

Imagine David Lynch directing Pulp Fiction using themes from Alice in Wonderland but with British accents in a neon-clad city from Philip K Dick’s Electric Dreams. That’s what Terminal wanted to be. Sounds awesome doesn’t it? So it was either going to be one of the most uniquely astounding pieces of art cinema ever created or… a bit of a mess.

Don’t get me wrong, the film looks absolutely stunning; the cinematography, the lighting, the sets and locations, the costumes, hair and makeup are all magnificent, eyecatching and atmospheric. The use of colour was beautiful and the scene set ups constructed rich and intriguing backdrops and really built up my hopes for the film at the start. But, that’s all I got because, for me, the hoped-for film didn’t happen and, thinking about it now, I can narrow down the reasons for the rest of it being a mess to two things – the story tried too hard and the cast didn’t try hard enough.

The cast, when you read it on paper, is very impressive until you, and they, realise that they have been cast into characters that are cringeingly stereotypical for them. Margot Robbie is the psycho, multi-character femme fatale – think Harley Quinn in stiletto heels, Dexter Fletcher is the Lock Stock wise-cracking gangster gun for hire with a good looking but easily manipulated side-kick in Max Irons and Mike Myers is the enigmatic, vaguely comedic station “night supervisor” character we all feel sorry for at the start and they all pretty much phoned it in as they’ve played these roles so often before. So there was nothing new, no spark, no life, nothing to draw me to engage with any of these characters and want to know more as I felt I knew them already from other performances. It says a lot for the acting when I admit that Simon Pegg gave one of the more convincing performances as an English Professor with a terminal illness who comes to the station to throw himself under a train, although his story plays out too much as expected, and I ended up wanting to throw him under a train myself just so he would stop.

And that’s pretty much what went wrong for me about the whole of the story – it was very much “as expected.” The plot seems quite complicated on the surface, as it is presented in the vignette style of Pulp Fiction with the various scenarios being stitched together as the film goes on. The thing is, the film emphatically joins the dots for you and makes a point of making sure you know that the line between the dots is there. I found it too heavy handed and clunky with its clues, so that what should have been big reveals was just another tick-box event. But, even then, the film back-tracked through the clues afterwards so that you can all say “oooh that’s how it was done, isn’t that clever” as if you hadn’t seen it coming a mile off. Thusly, Terminal trundled along in fairly formulaic style until it decided to do a big ending. Or, rather, three different big endings, one after the other. The first is the ending you expect, ho-hum, fair dos. The second, well, yes ok we can see where that came from but we didn’t really need to know that and it didn’t add much to the rest of it, now did it, and the third… I mean, that just smacks of desperation in a “throw every plot twist you can think of at it and shout ‘Aha, you weren’t expecting that were you’” kind of way. Only it was so cliched that we were expecting it, so that didn’t work either. And why did they have to show the gory bit rather than leave it to the imagination? Oh yes, it’s so that they’re sure you understood what was going on because, sadly, they can’t leave you wondering.

So in a nutshell then, for me Terminal is beautiful but uninspiring and trying too hard to appear clever.